On the same day a Ramsey County District Judge decided a case could move forward against a St. Anthony police officer charged in the shooting death of a black man he pulled over in Falcon Heights, a panel of five black men gathered in nearby Roseville to... 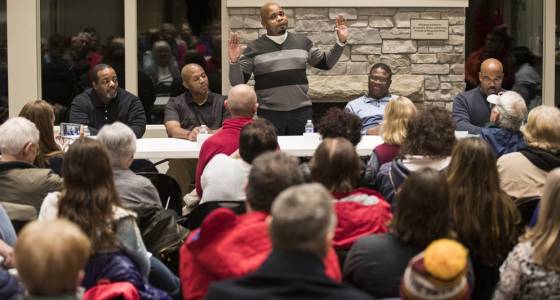 On the same day a Ramsey County District Judge decided a case could move forward against a St. Anthony police officer charged in the shooting death of a black man he pulled over in Falcon Heights, a panel of five black men gathered in nearby Roseville to offer their perspective on issues ranging from racism to being stopped by police.

The goal, said the organizers of Ask A Black Man, was to share with the public what area residents — a teacher, an engineer, a stay-at-home dad, a probation supervisor and a physician — experience as black men. Roy Adams, a Roseville resident, told the crowd of about 100 gathered this month at Autumn Grove Park that he was eager to participate. So, too, was the audience, which gave the men a standing ovation at the end of the evening.

The conversation spanned a wide range of topics — from their reaction when they see the confederate flag displayed to the difficulties of black professionals trying to find community in the suburbs. Mark Tinsley, who once was a prison guard and is now a teacher, said he has seen "the beauty of cooperation and understanding and the ugliness of snap judgments."

Donald Bratton, a dad who moved from Kansas three years ago, said he's optimistic that what he and the others had to say will help "to further a conversation and a little understanding."

Said Dr. Etienne Djevi, who came to Minnesota a decade ago from Benin in West Africa: "We look different. But we all have red blood."

The format was open to any question from the crowd, said Nyia Harris, a Roseville resident who pitched the idea to the folks at Do Good Roseville, which conducts community conversations to help share ideas and information. Her only rule? Be nice.

Sherry Sanders, co-founder of Do Good Roseville, said she was so happy with the panelists and the standing-room-only crowd that organizers are already thinking of a sequel. Maybe "Ask A Black Woman." Engagement is key, she said.

"The building block of community is trust," Sanders said. "To build trust, you have to have communication. This was a good step."

One question: How do you cope when someone tells you racism no longer exists?

"Whet gets me is when people can look you in the eye and say, 'It's all in your head,' " he said. "That gets under my skin."

Another question: What do they do when they are stopped by police?

Harris, who said he has been pulled over "so many times I've lost count," said he keeps his hands on the dash and is "overtly polite" whenever police stop and question him "even though I've done nothing wrong." Still, he said, police have often treated him aggressively.

Adams, supervisor of intake and investigations in Ramsey County juvenile probation, said: "My biggest fear in my whole life is encounters with police. It is the only time where I am not calm and confident."

Nonetheless, he said, he has taught his son less about what to do when stopped by police and more about the importance of what he learns in school and the character he conveys.

"I really want to model for him what it takes to be a good person," he said. "Everything else will take care of itself."