Battalion Chief Tony Carraro of the Greater Round Lake Fire Protection District said the vehicle, a dark blue Suzuki Vitara, entered the pond near the Home Depot, 2050 N. Route 83, shortly after 2:30 a.m.He said the man driving the vehicle was able to get... 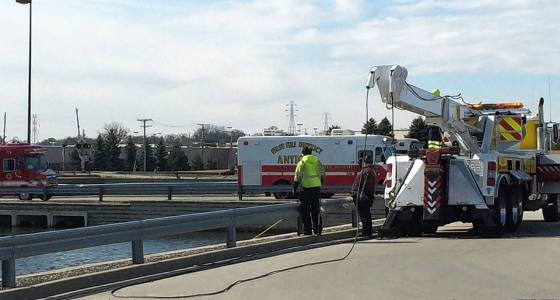 He said the man driving the vehicle was able to get out and go to the nearby Meijer at 750 E. Rollins Road to summon help.

The fire department was unable to provide any information about the driver, referring inquiries to the Round Lake Beach Police Department, which was not available for comment.

Carraro said it was too hazardous to attempt to retrieve the car in darkness, so crews returned around 10:30 a.m. Sunday to extract it. Divers from several departments converged on the scene and met with the towing company, Antioch Automotive to devise a plan.

Divers descended and marked the vehicle with a buoy, after which a tow cable was attached to the car. Because of the sheer walls of the pond, a specialized wrecker was employed to pull the vehicle from the frigid water.

"We had to switch out divers frequently because of the cold water," Carraro added.

Two divers from Round Lake, one from Grayslake, one from Antioch, two from Lake Villa and two from Fox Lake took part in the effort.