PAINESVILLE, Ohio -- About 150 people gathered in Veterans Park on Painesville Square on Saturday morning for what they called a town hall meeting to raise issues with their congressman. As with many similar events across the country during the current recess,... 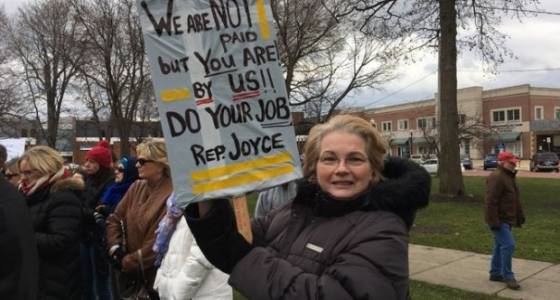 PAINESVILLE, Ohio -- About 150 people gathered in Veterans Park on Painesville Square on Saturday morning for what they called a town hall meeting to raise issues with their congressman.

As with many similar events across the country during the current recess, the congressman -- Republican David Joyce of Russell Township -- did not attend, but was represented by a life-size cardboard cutout.

A bitter gust of wind knocked it over as the event started, and the crowd chanted "Where is Dave?"

"He was invited multiple times," said Melissa Granke of Macedonia, who organized the gathering with the group District 14 Voters, which she said was largely drawn from the state Democratic party.

Joyce, who cited a schedule conflict, announced he will hold a telephone town hall with constituents Monday evening.

In his absence, a succession of speakers from the mostly middle-aged crowd drew from personal experiences to talk about their support for the Affordable Care Act, immigration reform, protection of the environment and public education. Some called for resistance to President Trump's agenda.

"This is not a sprint. This is a marathon," one said, calling on listeners to organize and prepare for next year's midterm elections.

Homemade signs covered a range of issues, with health care chief among them, mocked Joyce as "missing" or "chicken," and scoffed at the idea that anyone was paying them for activism.

"We are not paid but you are! By us! Do your job Rep. Joyce," read a sign held by Cynde Kennedy of West Farmington -- "the only part of Trumbull County in District 14," she said. "That's what gerrymandering does."

The 14th District also includes portions of Cuyahoga, Portage and Summit counties and all of Lake, Geauga and Ashtabula counties.

Closer to home was Brian Rice, of Painesville, who said he had marched in support of immigration reform that died in Congress in 2010.

"I'm here to say that sometimes the law is unjust," he said, opposing the wholesale deportation of undocumented immigrants. "The system is broken."