DeVos is in; will Puzder get out? Kevin O'Brien

President Donald Trump and Labor Secretary-designate Andy Puzder, who may represent Senate Democrats' best chance to deny Trump a Cabinet post confirmation.Carolyn Kaster/Associated Press  Betsy DeVos is the secretary of education. Who would have thought?... 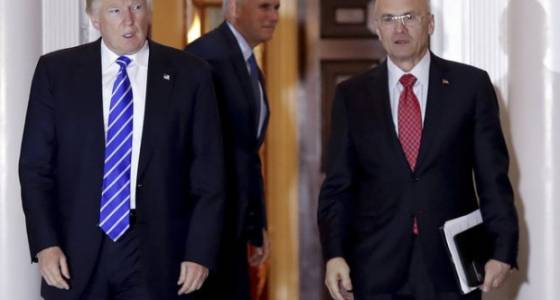 Betsy DeVos is the secretary of education. Who would have thought?

The best celebratory comment came from National Review's Charles C.W. Cooke, on Twitter: "Senate should now hold a vote on abolishing the Dept. of Education. 'Okay, fine. You can [get] rid of DeVos.' "

That same day, Kentucky Republican Rep. Thomas Massie introduced a bill to (in the old days, this is where a columnist would write, "wait for it," but with Washington moving at the speed of Trump, we don't wait for much anymore) abolish the Department of Education.

Of course, that bill is going nowhere. Right? We do not simply abolish Cabinet departments; not even the completely unnecessary ones. ... Do we?

So what to expect from DeVos?

Leading up to her confirmation, the wailing on the left got pretty loud. She was going to ruin public education, a system that, for the left's purposes, is in pretty good shape. The left's purposes involve paying unionized teachers and perpetuating a permanent underclass.

The glee on the right was almost as noticeable. DeVos was going to enable families across the land to escape the public school monopoly. And in the course of doing so, she would stick it to those selfsame unionized teachers.

It's hard to imagine more worthy goals, but it's impossible not to imagine a spectacular collision as the speed of irresistible Trumpian force meets the immovable bureaucratic object.

DeVos is the right person to begin the necessary dismantling of federal power over education, but getting the job done from within will take a long, long time.

Every poor family she can rescue from awful public schools is a plus, but as long as we're in the market for miracles, passing Massie's bill would do the whole country a lot more good.

How serious is Puzder?

DeVos was the congressional left's first maximum opposition effort of the confirmation season. Democrats do not say no to the teachers unions.

Ordered to die on that hill, if necessary, they dutifully went. And they died.

But they may have a shot at blocking Andrew Puzder, Trump's nominee for secretary of labor, a fairly unsympathetic character whose personal past includes hiring a maid who was in the United States illegally.

Illegal domestic help was enough to keep both Zoe Baird and Kimba Wood from becoming President Bill Clinton's attorney general back in 1993. But times have changed, no?

Democrats today do battle on behalf of illegal immigrants every chance they get, so under other circumstances Puzder could be a hero. As it is, his status as a Trump nominee allows the left to overlook his sanctuary-employer credentials.

Senate Minority Leader Charles Schumer suggested on Thursday that Trump withdraw Puzder's nomination "before he further embarrasses this administration" -- a strange thing to say about an administration that demonstrates its immunity to embarrassment several times a day.

Puzder, however, might withdraw on his own. He seems not to be having much fun, and he knows the pummeling will only grow worse.

If he bails out, that would give the Democrats one scalp -- yes, that is a Sen. Elizabeth Warren reference -- to show for all their dramatics over DeVos and Attorney General Jeff Sessions, whom they tried to portray as a bigger racist than the late KKK Exalted Cyclops (Sen.) Robert Byrd.

News reports say that if the remaining nine nominees are confirmed, it will probably be by party-line votes. And it seems unlikely that the almost perfectly monolithic Senate Republicans will lose their discipline.

If Puzder goes the distance, four remaining nominations are likely to be particularly contentious. If he doesn't, the fur will still fly over Trump's choices to lead the Treasury Department (Steve Mnuchin, former partner at the evil Goldman Sachs empire), the Department of Housing and Urban Development (Dr. Ben Carson, whom Democrats will portray as a brain surgeon too dumb to run an operation that supervises big cities' decay) and the Environmental Protection Agency (Scott Pruitt, CLIMATE CHANGE DENIER!).

The fun is far from over. And if Rep. Massie has any more bills up his sleeve that would abolish federal departments, nine more rounds of Democratic histrionics should put the country in the mood to give them some serious thought.