After Education Secretary Betsy DeVos visited Howard University this month as one of her first actions in office, a group of student protesters called for President Donald Trump to be barred from the District of Columbia campus and for the school to reject... 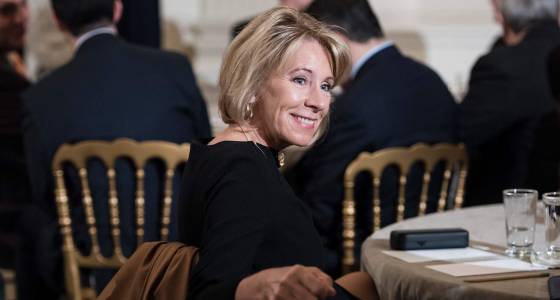 After Education Secretary Betsy DeVos visited Howard University this month as one of her first actions in office, a group of student protesters called for President Donald Trump to be barred from the District of Columbia campus and for the school to reject federal funding during his administration.

It was a moment that showed the suspicion and hostility some people at a prominent and historically black university feel toward the new president and the Republican-controlled Congress. In the 2016 election, exit polls showed black voters overwhelmingly opposed Trump. But DeVos's overture was symbolic of a visible outreach from the GOP to historically black colleges and universities, known as HBCUs.

"This is important to me personally," said Rep. Mark Walker, a Republican from North Carolina who along with Sen. Tim Scott, R-S.C., plans to lead a discussion with more than 85 presidents and chancellors of HBCUs Tuesday at the Library of Congress. House Speaker Paul Ryan, R-Wis., and Sen. Marco Rubio, R-Fla., are expected to attend, and DeVos will deliver the keynote address. The White House also is said to be planning an executive order related to HBCUs.

Advocates of HBCUs are mindful of skepticism about the outreach.

"It is unprecedented," said Johnny Taylor, president of the Thurgood Marshall College Fund, which supports HBCUs. "It's really, really bizarre, is the only thing I can say. It's so counterintuitive you can't make it up."

Taylor said he has spent a lot of time on the phone in recent days, talking with presidents and chancellors who are skeptical of the motives. "People said, 'What's this about? Is it just a photo op? . . . Is this some sort of a planned effort to convert our campuses to support the Republican Party?'

"People were really, really suspicious about it."

Education Secretary Betsy DeVos said Thursday that she intends to forge ahead with her approach to overhauling U.S. schools, declaring that the Obama administration's efforts to improve them had failed "miserably" and taking a swipe at journalists and critics who have called her ill-prepared for...

Education Secretary Betsy DeVos said Thursday that she intends to forge ahead with her approach to overhauling U.S. schools, declaring that the Obama administration's efforts to improve them had failed "miserably" and taking a swipe at journalists and critics who have called her ill-prepared for...

But Marybeth Gasman, a professor of higher education at the University of Pennsylvania and director of the Penn Center for Minority Serving Institutions, said that over the past 50 years, such schools have had bipartisan support. Funding levels have stayed relatively the same, by and large, over that time. Meetings with members of Congress happen routinely, she said.

Both Bush presidencies were supportive of historically black colleges, Gasman said. And every president since Jimmy Carter has issued an executive order about them. She was dismissive of the idea that Omarosa Manigault, director of communications for the White House Office of Public Liaison and an alumna of historically black universities, would be a powerful ally for the schools. "She may have gone to HBCUs," Gasman said, "but she really knows nothing about education."

Education Secretary DeVos criticized teachers at D.C. school she visited — and they're not having it Emma Brown

Newly minted Education Secretary Betsy DeVos had a hard time getting inside the District of Columbia's Jefferson Middle School Academy last week when protesters briefly blocked her from entering. But at the end of her visit -- her first to a public school since taking office -- she stood on Jefferson's...

Newly minted Education Secretary Betsy DeVos had a hard time getting inside the District of Columbia's Jefferson Middle School Academy last week when protesters briefly blocked her from entering. But at the end of her visit -- her first to a public school since taking office -- she stood on Jefferson's...

Last month, billionaire Charles Koch, well known for his support of conservative political causes but also a major donor to education, announced he would give nearly $26 million to help launch a research center with the Thurgood Marshall College Fund.

During the Obama administration, HBCU leaders applauded the expansion of Pell grants and other steps taken to support access to higher education. But many hoped that the first black president would do more for their schools. Some were upset a few years ago by a decision by the Education Department -- later revised -- to tighten lending standards for parents borrowing money for their children's educations.

Student and parent debt and low graduation rates have plagued many of the schools, but university officials are ready to make their case for the importance of the more than 100 historically black colleges and universities in supporting and educating African American leaders. Three-quarters of all doctorates awarded to black people, three-quarters of all black officers in the U.S. military and 80 percent of black federal judges got their undergraduate degree at such a school, according to the Education Department.

The United Negro College Fund has asked Trump, in an executive order, to move the White House initiative on HBCUs from the Education Department to the White House to be led by someone "who reports to a senior adviser to the president." The UNCF also wants Trump to "commit to an aspirational goal that HBCUs be awarded five percent of total federal grant, internship and cooperative agreement funding; and 10 percent of total federal contract funding awarded to colleges and universities, which would nearly double federal support to HBCUs."

The group said in a statement: "When only six percent of African-American children graduate from high school college-ready, and only 22 percent of African-American young adults have earned bachelor's degrees, it is clear that our nation's promise to provide equal opportunity for higher education for students of diverse backgrounds is still unfulfilled, while the need for that education grows more essential each year."

A spokesman for the White House declined to comment on possibilities for the executive order.

Taylor said, "We want the president to then put his money where his mouth is." He said advocates will be watching the budget process to see whether an executive order ultimately translates into funding from Congress. Federal documents show that the government spends more than $320 million a year on initiatives that seek to strengthen HBCUs.

Taylor said he was encouraged by a bipartisan committee on historically black colleges that has been meeting for about a year. Walker, he said, has gone to every meeting. The largest HBCU in the country, North Carolina A & T State University, is in Walker's district.

The stakes are especially high for Howard, the elite private university celebrating its 150th year, which gets substantial annual funding from the federal government. The current federal appropriation for Howard and its hospital totals $222 million a year.

A university spokeswoman said its president Wayne A. I. Frederick and other leaders was unavailable for an interview late last week. On Thursday, Frederick said on WAMU's Kojo Nnamdi show that he felt strongly that academic freedom requires schools to engage with people with whom they disagree as well as those with whom they agree. He pointed out that federal funding is not something Trump pulls out of his wallet, saying there is a long tradition of support for the institution and what it contributes to the nation which does not involve the compromise of any principles.

Frederick said he would like to see a day of independence for Howard when it's no longer reliant on a line item in the federal budget. But the school is a long way from that, with a massive backlog of deferred maintenance costs and uncollected tuition.

He said, "I will put an emphasis on the importance of funding," at the meeting Tuesday. He said he was also interested in talking with presidents about efforts to recalibrate their schools to put more emphasis on science, technology, engineering and math, given estimates of millions of job openings in such fields.

Walker said he wants to push back on the notion that historically black colleges can only benefit the minority community. "It's not true," he said. It's personal for him: His wife, who is white, graduated from historically black Winston-Salem State University. "HBCUs can benefit all communities. We've got to move beyond the stereotypes."

The alliance isn't a natural fit for the Republican Party, he said, but that shouldn't stop leaders in the party from building relationships. "I hope this is a precedent to move past some of the toxicity in the current climate, and move on some of the real issues."