Developer will build 24 cluster houses in Strongsville, despite protests from residents

STRONGSVILLE, Ohio - An Atlanta-based developer will build 24 cluster houses off the west side of Pearl Road, just north of Boston Road, despite the protests of residents already living in the area. Pulte Homes, which has several Greater Cleveland offices,... 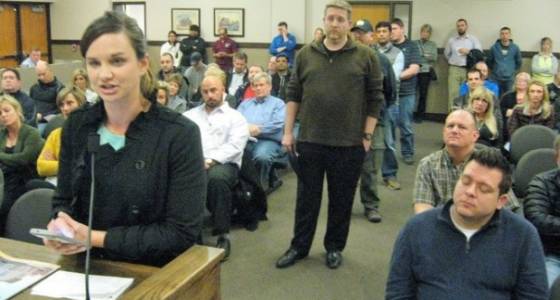 STRONGSVILLE, Ohio - An Atlanta-based developer will build 24 cluster houses off the west side of Pearl Road, just north of Boston Road, despite the protests of residents already living in the area.

Pulte Homes, which has several Greater Cleveland offices, will construct the homes on 11 acres in an existing subdivision, The Enclave of Fieldstone Preserve. The new homes are the third phase of the Fieldstone development.

Two days earlier, about 100 residents from Fieldstone - plus two neighboring subdivisions, The Woods of Strongsville and Waterford Crossing - filled City Council chambers and asked the city to slam the brakes on the 24-home project.

Residents worried that more construction, and the accompanying removal of trees, would worsen flooding in their neighborhoods, lower property values and hurt wildlife.

Residents also objected to Pulte's plan to connect Ledgestone Drive in Fieldstone - which now has just one entrance off Pearl - with Martins and Whitemarsh lanes in the Woods. All three streets now end in cul-de-sacs. Residents said connecting the streets would create a short-cut for speeding drivers wanting to avoid Pearl and Boston, along with Drake Road to the north and Prospect Road to the south.

At least five residents said Pulte representatives previously promised the firm would not build additional homes on the site now slated for the 24 cluster houses. Further, residents said they paid premiums of up to $30,000 - in addition to the cost of their lots and homes - to keep out more construction.

"They (Pulte) lied to us, but not only us, but other homeowners, too," the Rev. Igor Bagirov, a Fieldstone resident, told council. Bagirov, who used the word "fraud" when referring to Pulte, said he and other Fieldstone residents have hired attorneys and may take legal action.

When asked about Bagirov's comments, Greg Modica - who represented Pulte at Tuesday's council meeting - said he was not involved in the sales process and didn't know what Pulte salespeople might have told Fieldstone home buyers. He said he hadn't had time to look into the matter.

At Tuesday's meeting, Modica told council that Pulte has always worked "hand-in-hand" with the city to build high-quality developments. He said he has lived in Strongsville since 1987 and takes pride in his work here.

Modica said he received letters from several residents in the Fieldstone area and takes their concerns seriously. However, he said their objections to the 24 cluster houses were "opinion-based."

"All of the residents' concerns have already been addressed by sound engineering and planning," Modica told council.

"Just meeting the requirements, I don't think is good enough anymore," Cirino said. "I don't think there's anything wrong with expecting greatness in our community."

Resident Chris Dewes said Pulte is squeezing too many homes in too small an area. He said the cluster homes, valued at about $250,000, would bring down the values of existing homes, which cost $350,000 and more.

Mike Galloway, of Lyon Lane in the Woods, said his subdivision has already lost "tons" of trees over the past 15-20 years. He said residents moved into the Woods because it was forested.

Henry Durica, of Martins, said he relocated from Parma to Strongsville so he could have more space.

"Give me five positives - just five - to sway me to even think that this (Pulte plan) is a good idea," Durica said.

Bagirov - pastor of Beth-El Messianic Ministries & Congregation in Lyndhurst - said his house is the last on Ledgestone and abuts the woods that Pulte wants to chop down. He said he moved his family there in July because one of his children is ill and needs a quiet area.

Bagirov said he paid a premium of between $24,000-$30,000 for the lot. He said Pulte representatives promised they would never build in the woods next door.

Jason Heckman, of North Greystone Drive in Fieldstone, said he paid a $7,000 premium for his lot, believing he would have privacy and a wooded area nearby.

"Are you going to reward that type of business practice?" Heckman asked council. "I don't think you should."

Residents vented at Tuesday's meeting even though council has no vote on the subdivision. The Planning Commission has the final say, but the commission normally doesn't allow public comments, unless a formal public hearing is scheduled.

As for the street connections, Councilman Gordon Short said the city's master street plan calls for such linkups as developments grow, so that police and firefighters have easy access to the homes.

To address concerns about speeding drivers, Pulte agreed to build two traffic-calming concrete islands where Ledgestone in Fieldstone will connect with Martins and White Marsh in the Woods.

Assistant Law Director Dan Kolick said the developer also agreed to add landscaping and screening at the city's request. However, because the plan meets code requirements, the city can't stop construction or the removal of trees, since developers, like anyone, have property rights.

"We don't have the authority to do it," Kolick said.

Short, speaking for his constituents, asked the commission to delay Fieldstone's third phase so that residents would have time to work with the developer and improve the plan.

After the commission's vote, disappointed residents walked out of council chambers. They lingered in the hallway and outside the building, considering their next move.