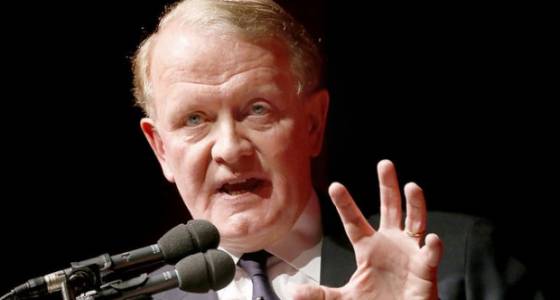 The crowd, which filled most of a 900-seat auditorium at Raritan Valley Community College, peppered Lance (R-7th Dist.) with forceful questions about his voting record in Congress and his stance on recent moves by President Donald Trump's administration.

Lance remained calm as some audience members yelled out insults throughout an increasingly tense event, and he thanked people for their questions.

"I don't believe anybody in this audience is paid, ladies and gentlemen," he said as the town hall began at 9 a.m.

Lance is among several Republican federal legislators who faced raucous audiences at town hall meetings in their home districts during this week's congressional recess, but he was New Jersey's only Republican member of Congress to do so.

In Branchburg on Saturday, audience members raised green "thumbs up" signs to express agreement with some of Lance's responses and yelled out to challenge many of his other answers.

One of the most boisterous moments of the event came when an audience member asked if Lance would support calls for an independent investigation into Trump's ties to Russia.

The crowd chanted "Yes or no?" as Lance began to respond.

Immigration was also at the forefront of the event, as audience members asked several questions about Trump's travel ban and a potential wall on the U.S.-Mexico border.

"Congressman, we're scared. What are you going to do about it?" someone yelled as Lance began to answer a question about the executive order on immigration.

"I want to assure all of my residents, including my Muslim constituents, that I certainly favor no ban that would exclude refugees or others coming into this country based on some sort of religious test," Lance said.

He said he opposes building a wall or a fence across the entire southern U.S. border but believes the country needs to "beef up" security on certain parts. Lance said he would analyze any bill that came before Congress to decide whether he thought it would effectively curb illegal immigration.

He dodged questions about his views on White House chief strategist Steve Bannon's appointment to the National Security Council. One constituent called Bannon anti-Semitic and said she was offended by his power in the government.

"Will you denounce Steve Bannon?" she asked.

"I denounce any form of anti-Semitism," Lance responded.

After the town hall, Lance said he had defended his own views and not necessarily Trump's policies.

"I indicated where I agree with the president and where I disagree," he said.

Lance has served eight years in his solidly Republican congressional district, which covers parts of six counties in Central Jersey. Although he solidly beat Democratic challenger Peter Jacob in 2016, the district went for Hillary Clinton over Donald Trump.

The Democratic Congressional Campaign Committee in January put Lance on a list of congressional seats it plans to target in 2018.

The anger of some constituents who greeted Lance on Wednesday was again on display Saturday morning as dozens of protesters gathered outside with signs that advocated for progressive issues and expressed anger with the Trump administration.

Rob Bentlyewski, of Dover, said he was galvanized by the energy he has seen the political left display since November's election.

"I got excited by the mass movement of people showing up to town halls," he said. "I felt like if I didn't join in, I'd look back and feel like I was on the wrong side of history."

About 100 protesters at @RepLanceNJ7 town hall chanting "No hate, no fear. Immigrants are welcome here." pic.twitter.com/dA2Bx3ELQc

Flemington resident Joyce Santos said Friday she planned to attend the town hall to probe Lance about his stance on funding Planned Parenthood, climate change, health care and gun control. She sits on the steering committee of the progressive advocacy organization NJ7 Forward, an 800-member group that aims to challenge Lance on his voting record.

Santos said she started lobbying members of Congress about a year ago, but Donald Trump's ascendance to the presidency motivated her to become more politically active. Going to town hall meetings is a way to tell legislators what's on her mind, she said.

"We're all very grateful that (Lance) is holding the town halls," said Santos, who has lived in New Jersey's 7th congressional district for 30 years. "At least it's giving us an opportunity to talk."