The death of an Iranian jeweler who was found in a bathroom with zip-ties around his neck in Tribeca earlier this month has been ruled a homicide — and police are searching for his killer, police sources said.Omid Gholian, 43, was found on Feb. 15 inside... 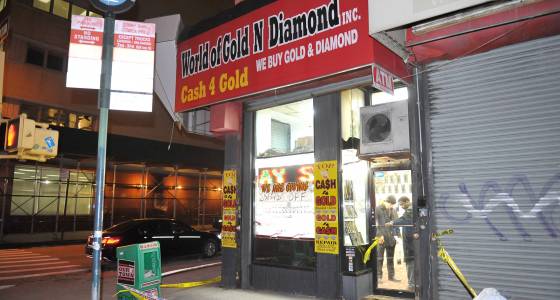 The death of an Iranian jeweler who was found in a bathroom with zip-ties around his neck in Tribeca earlier this month has been ruled a homicide — and police are searching for his killer, police sources said.

Omid Gholian, 43, was found on Feb. 15 inside the bloody bathroom in World of Gold N Diamond at 193 Church St. about three blocks from City Hall.

“The cause of death is compression of neck,” said Julie Bolcer, a spokeswoman for the city Medical Examiner’s Office. “The manner of death is homicide.

The Marine Park man’s family filed a missing-person ­report with the 1st Precinct two days earlier after they hadn’t heard from him for a few days, police said.

His brother had gone to the store to search for him but the gate was locked. Cops were able to locate a family member and open the gate.

Gholian, who neighbors described as a friendly man, was found lying in a pool of blood in the bathroom with two zip-ties around his neck and a plastic bag over his head, police sources said.