KABUL—At least 10 police officers and the wife of a police commander were killed in an ambush by Daesh militants in northern Zawzjan province, a provincial official said.Mohammad Reza Ghafori, spokesman for the Zawzjan provincial governor, said Saturday... 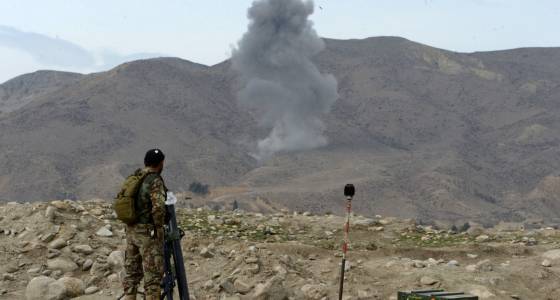 KABUL—At least 10 police officers and the wife of a police commander were killed in an ambush by Daesh militants in northern Zawzjan province, a provincial official said.

Mohammad Reza Ghafori, spokesman for the Zawzjan provincial governor, said Saturday that the police officers were ambushed Friday as they were coming out of a mosque. The wife of the police commander heard about her husband being shot and rushed to the scene, where she was also killed.

Daesh-linked militants have been active in Afghanistan’s eastern regions, but have recently begun operating in the north of the country as well.

Meanwhile, the Interior Ministry said in a statement that around 38 militants, including 23 Daesh fighters, were killed in separate operations conducted by Afghan security forces in the eastern and southern regions of the country over the past two days.

Eight other militants were wounded and six arrested in the operations, which were conducted in districts across the Nangarhar and Helmand provinces, the statement added.

In another report form eastern Laghman province, two students were killed when a mortar struck a school’s classroom, a news release from the Education ministry said. The statement added that five other students were wounded inside the classroom in Mihterlam, the province’s capital.

There were unconfirmed reports the mortar was fired by Afghan security forces and missed its target and hit the school. The report could not immediately be verified by provincial or government officials.

In a separate report form northern Faryab province at least one police officer was killed when a remotely controlled bomb went off inside a bazaar, said Karim Yuresh, the spokesman for the provincial police chief.

He said that 16 others including 15 innocent civilians and a policeman were wounded in the blast. “The blast took place inside a market where innocent civilians were busy with their daily businesses,” said Yuresh. He added that the intended target were the two policemen in the market.

No group has claimed responsibility for the Faryab attack, but Taliban insurgents usually use roadside bombs and suicide attacks to target Afghan security forces as well as government officials across the country.