It was like a scene from “Final Destination.”A father of six was nearly skewered Thursday night in a freak accident on the Brooklyn-Queens Expressway — when a pole flew off a flatbed truck and went right through his windshield.The incident... 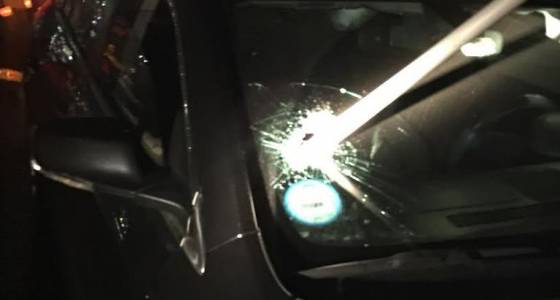 A father of six was nearly skewered Thursday night in a freak accident on the Brooklyn-Queens Expressway — when a pole flew off a flatbed truck and went right through his windshield.

The incident happened around 8:45 pm, when limo driver Munther Abu-Hamea, 45, was driving westbound on the highway near Cadman Plaza as he headed home to Staten Island.

About 70-100 poles fell off a truck traveling the other direction on the roadway, which is stacked in that section, and some of them landed on the lower section.

“It was like an explosion! Like a movie! one pipe went through my windshield and hit my shoulder,” Abu-Hamea said.

His Buick Lacrosse was hit by other several poles, damaging his car’s roof and shattering the dashboard.

“I feel really lucky, but I’m very shaken. I’m scared to drive again.” Abu-Hamea said. “All I kept thinking about was my kids and how I was never going to see them again. I thought I was going to die.”

A white 2013 Nissan Rogue was also struck by the poles, but officials tell the post no one was injured.