CLEVELAND, Ohio - Cuyahoga County Council members are concerned about the county's role in financing the proposed renovation of Quicken Loans Arena. Council members on Tuesday sought information about where that money would come from, whether other... 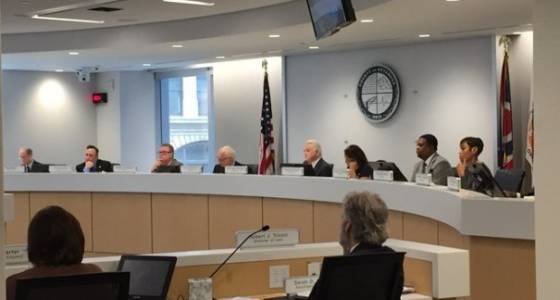 Council members on Tuesday sought information about where that money would come from, whether other ways to pay for renovations had been considered and and why the county is responsible for issuing all $140 million in bonds.

Council members, who must approve the bond sale before it can go forward, peppered fiscal adviser Timothy Offtermatt with questions about financing, reserve funds and how the project would be funded.

It is not known when council will vote on the plan. Another committee meeting will be held on March 14 prior to the 5 p.m. council meeting.

See plans for the Q transformation

If approved, the plan, which involves no new taxes, will cost a total of $282 million over 17 years, with loan interest and creation of a rainy day fund.

What others will pay:

What the county will pay:

From reserves: $16 million: The county will draw the money from a reserve fund set up for the convention center and the Hilton Cleveland Downtown, both of which are complete.

The county will pay $1 million to $2 million a year out of the reserves.

County sales tax: Typically, the county receives about $250,000 a year from sales taxes collected on food, alcohol and merchandise at the arena. This amount will stay in the general fund, under the proposal.

Any increase in Q sales taxes will pay for renovations.

Why not increase the bed tax?

Council member Jack Schron wanted to know if a quarter- or half-percent bed tax increase had been discussed as a source of financing the improvements. He said he never notices a bed tax when he travels until he checks out of a hotel.

"I have yet to find a bed tax is a deterrent to go to a city," he said.

Offtermatt, who admitted he never checked the bed tax before traveling,  said Destination Cleveland officials said that the bed tax and sales tax charged in the county made it one of the most expensive destinations when compared to comparable cities.

"We were reluctant to identify a new tax," he said. "My instruction from the executive (Armond Budish) was not to increase any taxes."

Wouldn't construction costs be  cheaper for the Cavs if they used design/build, which saved the county money on its projects?

Offtermatt said the county used every method to save money as it built the convention center, hotel and global health center. He said it was the decision of the Cavs on how to handle construction at the Q.

What effect will the state budget have on the county's finances and thus its ability to pay?

Offtermatt said the loss of funds could also require the county to spend more money on health and human services.

Why can't it be a true public/private partnership and have the Cavs finance its half?

"The county is going to issue the publicly backed bonds allowing a for-profit entity to take advantage of those bonds," said council member Nan Baker. "We are not using those bonds for a homeless shelter or Justice Center but are using it for a very strong capable sports team that could probably be able to finance this themselves."

Baker said she saw the renovation as a tenant upgrade, but understands the team provides a lot to the community.

She wanted to know if there was ever a discussion of a scenario where the Cavs funded its share.

Offtermatt said the county team talked "at length" about that scenario. He said the Cavs staked out a position.

"It was determined that because of the impact of the arena and previous experiences with professional sports teams in town - primarily the mid-90s Browns - and given the fact that the arena has some age that it was prudent to try and move forward the best way we could to get to a 50-50 arrangement  or as close to a 50-50 arrangement as we could," he said.

Baker said she was disappointed that the Cavs would not find their own financing.

"We are a county that has a lot of services and people we are trying to help," she said. "It is disappointing that we are paying so much in interest when that money could be put in other places."

People think the money is going to the Cavs

"I keep getting calls from constituents about us giving this money to Dan Gilbert," said council member Sunny Simon. "That this money is going to the Cavs. In layman's terms this is going to our public building."

The non-profit Gateway Economic Development Corp. owns the baseball and basketball facilities and enforces the team leases on behalf of the county. Gateway is a joint entity created by the city and the county, board members are appointed by both.

What happens to the funds that will be placed in reserve funds?

Council members asked about the proposed sports facility reserve fund, of which funds could be used for Progressive Field.

There were many questions about what would happen to millions in another reserve fund if the money was not needed or if they ran out, and whether the county would have to provide more money.

Offtermatt said the Cavaliers have agreed to cover any overruns. He said it was unlikely the county would have to provide more funding unless there was a significant rise in interest rates before the bonds were sold, which he believed was unlikely.

Will the Cavs hire local companies, including minority- and female-owned firms?

"What are the contracts, the apprenticeships and the jobs this money means?" asked council member Pernel Jones Jr.  "What is most important to the community is you are getting a piece of these dollars in contracts."

Contractors and Cavs CEO Len Komoroski have said Cavs owner Dan Gilbert has more than met those goals in the past and that would likely not be an issue for the renovation.

What the public said

An overflow crowd of more than 200 supporters and opponents of The Q renovation filled council chambers Tuesday, as they had for the prior two meetings on the bond legislation.

But they could not speak for hours because council had adjourned the Feb. 21 committee meeting and was not required to hear public comment until after the regular council meeting, which began three hours after Tuesday's committee meeting.

Many of those who signed up to speak had left by the time the public was allowed to speak, including Donnesha Cooper, the mother of 14-year-old Alianna DeFreeze, whose body was found Jan. 29 in an abandoned house on Fuller Avenue, three days after she disappeared while transferring buses as she was going to school.

Damon DeFreeze, Alianna's father, marched with several supporters outside The Q on Feb. 17. He said money should be provided to upgrade neighborhoods, including Union-Miles, where Alianna was killed.

One speaker said the community was being held hostage by a perceived threat that the Cavs would leave if the arena is not improved and the Cavs could afford the improvements.

Members of Greater Cleveland Congregations have said they are not against renovation but want an equitable investment in Cleveland neighborhoods. They asked for an independent economic study of the arena and for details on how much money the county gets from Q events and sales. They also asked council members to hold town hall meetings in the neighborhoods.