The University of Colorado Leeds School of Business is launching a new initiative aimed at increasing the number of women in business programs by 2020.The initiative, which is being announced today at the Women Inspiring Leadership Development (WILD)... 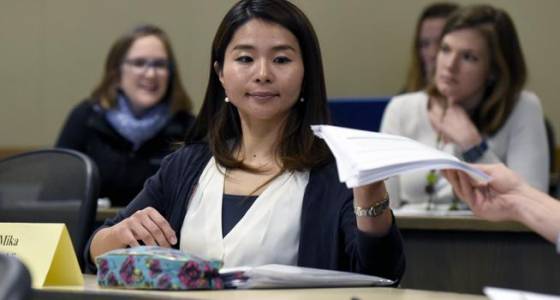 The University of Colorado Leeds School of Business is launching a new initiative aimed at increasing the number of women in business programs by 2020.

The initiative, which is being announced today at the Women Inspiring Leadership Development (WILD) summit in Westminster, aims to create gender parity in all CU business programs over the next three years.

The End the Gap by 2020 initiative was inspired by members of the Leeds School of Business Women's Council, a group of roughly 100 successful business women who advise the university, mentor students and speak in classrooms.

"This fall, the topic came up of the pipeline and how, not just here but nationwide, the percentage of women in business schools and programs is so much lower than law schools and medical schools, where it's about 50/50," said Sharon Matusik, interim dean of the CU business school. "There was this collective sentiment that we would really love to get our students across all of our programs to be 50/50 and we went from there.

"We like that phrase (end the gap) because while we're going to use it right now to work on the percentage of women in our programs, we think it also has some connotations for working toward gender pay equity."

Businesses with higher numbers of women and minority executives tend to be more ethical and more profitable, Matusik noted.

Beyond that, it just makes sense for companies to mirror the world around them.

"There's clearly a business case to be made," she said. "But I think more broadly, we live in a world that's 50 percent women and 50 percent men, so if you are not having women represented in your organization in significant decision-making capacities, you're missing out on a lot of information."

While science, technology, engineering and math (STEM) departments have tried hard to increase the number of women and minority students pursuing degrees in those fields, business hasn't quite caught up. That means business departments are losing out on talented students who are quantitatively oriented and analytical, Matusik said.

"Our friends in STEM have been doing a really great job reaching out to young women," Matusik said. "We're super happy for them, but that means we have to work harder. We have to get in front of those women earlier and help them understand the kinds of opportunities you can have with a business career."

The business school did not immediately have data available about the makeup of its undergraduate programs.

Matusik, who started her career at Leeds as an assistant professor in 2004, was named the interim leader of the business school in November. She stepped in following the resignation of David Ikenberry, who returned to teaching and research after complaints about his treatment of women in the college surfaced.

Matusik acknowledged her position in a male-dominated school and said she's been doing her part to expose students to diverse business leaders when she hosts panel discussions in the classroom.

She said it's important for women to understand that there are unlimited career possibilities available to people with business degrees — they don't have to become investment bankers.

"Role modeling is a big part of it," she said. "Regardless of your political persuasion right now, during the last election cycle we saw President Donald Trump as kind of the prototypical business leader. Some women don't really relate to that."

Efforts to increase the number of women standing at the front of Leeds classrooms have been underway since 2001, when members of the Leeds family created a $35 million endowment for the business school.

The school has made slow progress toward that goal, increasing the proportion of female tenure-track faculty to 21 percent in the fall of 2016.

Since last fall, the business school has launched two new initiatives aimed at making progress on the faculty front, according to Matusik.

Business school leaders are gathering data about the percentage of women who earn doctorates in various fields, such as finance, accounting and management.

Then, they plan to compare the number of women in the pipeline to their own faculty ratios. They also want to see how many women apply for open faculty jobs in those categories, as well as how many are selected for the interview process.

"We're going through a very detailed assessment, program by program, to try to figure out where we're doing well and where we need to do better," Matusik said.

The business school also launched this fall a dual careers program that will help the partners and spouses of new CU faculty find a job in Boulder that suits their skill set. That program is not limited to female faculty, though Matusik said she expects it will help the school attract more female applicants for faculty positions.

"It's definitely a moment of opportunity for us," Matusik said. "Obviously with me moving into this role, having those connections to the female business community here, that makes it somewhat easy for me to drive these initiatives forward. It's just capitalizing on a lot of the resources that are here in front of us."