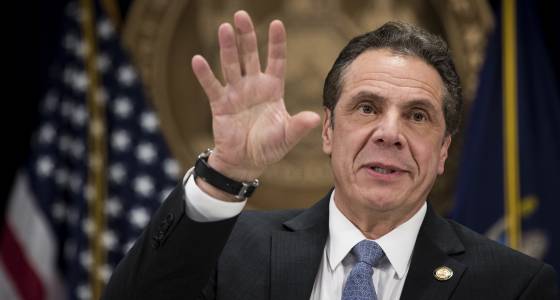 Gov. Cuomo’s $152.3 billion budget contains new ethics rules for legislators who steer state funds to projects — but they don’t apply to him.

The governor’s 2017 spending plan mandates lawmakers send a form to the state budget director verifying they have “no financial interest,” won’t receive a “financial benefit” and have “no known conflict” in connection with any funding request they make.

The ethics language appears 18 times in the 810-page budget, and applies to the Capitol cash lawmakers divvy among their districts.

But the rules don’t apply to a secretive treasure trove of borrowed money — the state Dormitory Authority’s State and Municipal Facilities Program (SAM).

The purpose of the pork stash has broadened since 2014, when Cuomo added the $385 million SAM appropriation to the budget to finance government buildings and school construction.

The honey pot has grown to $1.5 billion and now covers a range of “economic development projects,” including $5 million to help CBS refurbish the Ed Sullivan Theater in Midtown in 2014, and a $25 million grant in 2015 to help build Empire Outlets, a planned $350 million mall next to the proposed New York Wheel on Staten Island.

“If there is a big enough threat for bad behavior to put safeguards on all other programs, then why not on this one?” said Empire Center analyst Ken Girardin.

“The state shouldn’t be running these slush funds in the first place,” he added. “They benefit the political needs of elected officials more than they serve the public good.”

Girardin cited the $25 million award to Staten Island outlet developers as “one of the most questionable subsidies in recent state history.”

Both the governor and lawmakers can suggest pet projects to the Dormitory Authority, a quasi-governmental entity originally established to finance the construction of college dorms. It reviews proposals before disbursing cash.

Cuomo appoints five members of its 11-member board, and two other members, the state health commissioner and budget director, report directly to him. The other four members include the state education commissioner and appointees of the state comptroller, Assembly speaker and Senate president.

Legislators caution that all government projects should be vetted carefully or they could face the wrath of prosecutors.

US Attorney Preet Bharara told state municipal leaders at a Manhattan conference last week to be “wary of slush funds.”

“As far as I’m concerned, everybody should sign in blood there’s no conflict of interest in using state money,” said Manhattan state Sen. Liz Krueger.

State Budget Division spokesman Morris Peters said existing conflict-of-interest rules for the program “exceed the protocols for discretionary legislative grants.” But he wouldn’t explain what the rules are.