Three months after he was tapped to be deputy commerce secretary, Chicago Cubs part-owner Todd Ricketts remains in talks with government officials on how to handle his extensive holdings to avoid conflicts, a key senator said Tuesday.Sen. John Thune, R-S.D.,... 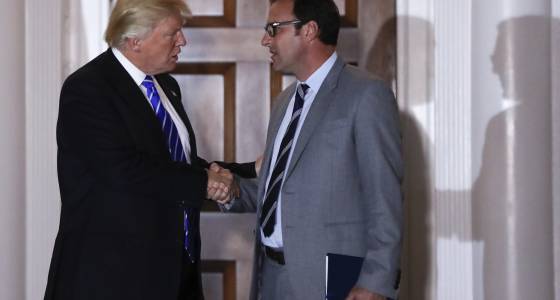 Three months after he was tapped to be deputy commerce secretary, Chicago Cubs part-owner Todd Ricketts remains in talks with government officials on how to handle his extensive holdings to avoid conflicts, a key senator said Tuesday.

Sen. John Thune, R-S.D., chairman of the Commerce Committee, said Tuesday he expects the panel will confirm Ricketts for the No. 2 spot at the Commerce Department "if he decides to proceed forward."

Asked whether it was Ricketts' Cubs ownership or another issue holding up the ethics negotiations, Thune said he was "not sure exactly."

"But I know that he's got a lot of business interests," Thune said. "And anybody who is nominated for one of these positions has to go through the process where they try and separate out — divest, you know — (and) sign an agreement that spells out how they're going to handle all these businesses while they're in office.

"And in most cases they're able to come to an agreement about that, but sometimes at a cost that people aren't comfortable accepting."

One such person is Philip Bilden, a private equity fund manager nominated to be Navy secretary. In withdrawing himself from consideration Sunday, Bilden said in a statement that he could not fulfill ethics rules "without undue disruption and materially adverse divestment of my family's private financial interests."

Ricketts appeared Tuesday at the White House to see his potential boss, Wilbur Ross, sworn in as commerce chief. Vice President Mike Pence presided at the ceremony and acknowledged Ricketts, calling him the "the future deputy secretary of commerce."

A source familiar with Ricketts' situation, who spoke on the condition of anonymity, said Ricketts was "100 percent committed" to going through the process and had met Tuesday with administration officials to discuss his confirmation.

Ricketts has met with many senators, the source said, including Illinois Democrats Dick Durbin and Tammy Duckworth. Durbin and Duckworth said Tuesday they were not aware of any issues that may be holding up the nomination.

Durbin said he had seen a news report indicating Ricketts had had difficulty reaching a pact to divest certain holdings, but "I don't know if he has any problems at all."

"I've not heard anything about that," Duckworth said.

Then-President-elect Donald Trump on Nov. 30 announced he wanted Ross and Ricketts to lead the Commerce Department, an agency with about 47,000 employees in 50 states and more than 86 countries. It takes in the U.S. Patent and Trademark Office, the National Weather Service, the Bureau of Economic Analysis and other entities.

No prizes for guessing which members of the Cubs-owning Ricketts family are planning to make the trip to the White House with the World Series champs on Monday — or which won't.

But Ricketts family spokesman Dennis Culloton did spring a minor surprise Wednesday afternoon, when he revealed that President-elect...

No prizes for guessing which members of the Cubs-owning Ricketts family are planning to make the trip to the White House with the World Series champs on Monday — or which won't.

But Ricketts family spokesman Dennis Culloton did spring a minor surprise Wednesday afternoon, when he revealed that President-elect...

Ross, a billionaire businessman, signed a long ethics agreement, had a hearing before Thune's panel and was approved by the Senate on Monday.

Thune said if Ricketts can reach an agreement with the Office of Government Ethics, he expects the committee "will process him and he'll have a confirmation hearing and we'll move him to the floor."

Ricketts, 47, of Wilmette, is an investor and bicycle shop owner and the son of Joe Ricketts, the family patriarch who founded TD Ameritrade. Todd Ricketts sits on its board of directors and the Cubs' board. He has managed his own personal investment portfolio since 2001, TD Ameritrade said in a filing to the SEC.

A major donor to Republican candidates and conservative causes, Ricketts originally backed Wisconsin GOP Gov. Scott Walker for the White House, but his allegiance shifted as Trump tightened his grip on the nomination.

Cubs Chairman Tom Ricketts, asked Monday if his brother was having second thoughts about the Commerce post if it meant he had to give up his spot on the Cubs' board, said only: "We're just waiting at this point."

In answers given to the committee, Todd Ricketts said during the last decade he had held positions with 17 entities, some Cubs-related and some not.

Sen. Bill Nelson of Florida, the top Democrat on the committee, sent a letter with pre-hearing questions to Ricketts on Jan. 3. Nelson asked for responses by Jan. 9 but hasn't heard back from Ricketts, said Bryan Gulley, a spokesman for the senator.

Nelson and two Democratic colleagues asked Ricketts about an array of subjects, including the Census Bureau, part of the department, and the 2020 census; the skills gap; internet governance; foreign steel dumping; and upgrades to the 911 emergency system.

Gulley said no confirmation hearing will be held until Ricketts' financial disclosure report is certified by the government ethics office.