Cuba tech startups land in Boulder for a Boomtown-style training

Thanks to the ongoing diplomatic thaw between the United States and Cuba, a foundation intent on cultivating private commerce in Cuba's largely state-controlled economy has turned to some of the USA's most energetic tech hubs for help.Under the guidance... 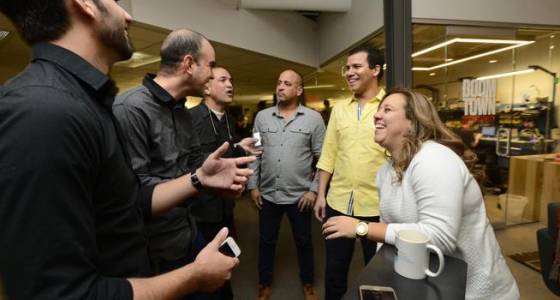 Thanks to the ongoing diplomatic thaw between the United States and Cuba, a foundation intent on cultivating private commerce in Cuba's largely state-controlled economy has turned to some of the USA's most energetic tech hubs for help.

Under the guidance of the Washington, D.C.-based Cuba Emprende Foundation, a cadre of young Cuban startup CEOs has arrived in Boulder to undergo a two-week intensive program on product design, finance, digital marketing and anything else Boulder's hyper-active startup community can throw at them.

The group is based out of Boulder accelerator Boomtown, with an assist from Techstars.

Problems and opportunities in Cuba abound, where the economic landscape is dramatically different than in the U.S. Two-thirds of the work force of roughly 5 million people is employed by the government, internet access is extremely limited and privately owned companies authorized by the state to operate are only gradually beginning to multiply, according to data provided by the Cuba Emprende Foundation.

Foundation Chairman John McIntire — a former Goldman Sachs banker whose mother was Cuban — has been working to open Cuba's economy to private sector activities for years. Last year, after helping launch an accelerator program in Cuba, he teamed with a Latin American group of business pros to select, through a competition, a handful of young Cuban CEOs to bring to the U.S.

In addition to the Boulder group, two others are working in Palo Alto, Calif., and Miami.

To see the young business people on the ground after years of envisioning the occurrence is gratifying.

"It's like a veil has been pulled back from their eyes," McIntire said.

The three firms in Boulder are focused on app development. One mimics an Amazon-like marketplace, another is based loosely on Yelp and a third offers users a quick way to peruse Cuba's arts and culture scene.

"We have wicked problems in Cuba," he said. "To see the thinking that goes on here is very interesting."

Bernardo Romero Gonzalez is CEO and founder of Cubazon, the Amazon-like market helping generate demand for Cuba-based goods and services.

This is Romero Gonzalez's third startup and the entrepreneur said being immersed in the U.S. tech community has made him more certain than ever that Cuba's small band of startups has what it needs to succeed.

"The Cuban entrepreneurs are prepared and have as much knowledge and ability as any," he said. "I feel confident now."

McIntire hopes that sense of opportunities opening continues to grow.

"Cuban entrepreneurs know difficulty and failure in spades," he said. "Learning new skills is key, but I'm really hopeful that they will take home the sense of optimism they see here. Optimism is in short supply there."