Some of the chaos in President Donald Trump's nascent administration is self-inflicted. Some of it is exacerbated by a purposeful media. And even if the former kind diminishes, the latter won't. Pablo Martinez Monsivais/Associated Press  So, here's... 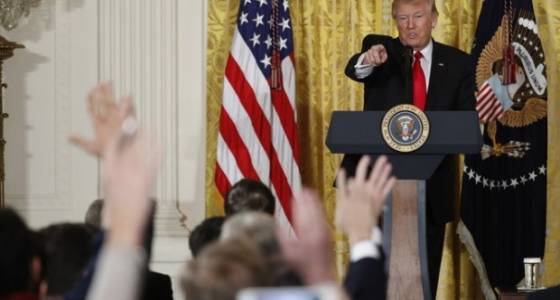 Some of the chaos in President Donald Trump's nascent administration is self-inflicted. Some of it is exacerbated by a purposeful media. And even if the former kind diminishes, the latter won't. Pablo Martinez Monsivais/Associated Press

So, here's the deal:

Nothing that happened in Barack Obama's presidential administration was a scandal. Not the gun-walking, not the ambassador killed by terrorists, not the pay-to-play green-energy stuff, not the weaponization of the IRS, not the Bowe Bergdahl swap, not the inspector general's firing -- none of it. Obama wanted it that way, and that was enough to make it so.

Everything that happens in Donald Trump's administration will be a scandal. Every Tweet, every denial of the obvious, every course change, every refusal to change course, every leaked internal disagreement, every assertion that some word or action is not a scandal. Trump is breathing, and that is enough to make it so.

During Obama's administration, it was wrong -- racist, no less -- to "obstruct" the president's agenda by constitutional means.

Even before Trump took office, he faced a "resistance" movement, and rioting was widely excused as merely a spirited form of political commentary.
With those ground rules in mind, the political left has determined its strategy and the media left has settled upon the narrative that will define the entire Trump presidency -- which is all of 1 month old today.

The strategy is to throw as much sand in the gears of government as possible, and to do it so often that Trump can accomplish little or nothing. The narrative is that chaos reigns across the length and breadth of the executive branch.

Should we reach the point at which the Trump administration is utterly paralyzed -- which I would define as nothing moving but the chief executive's Twitter finger -- the media will still be flogging the chaos theme.

Those who insist on looking on the bright side will say a trapped Trump is preferable to a President Hillary Clinton at large, and that may well be true. But it isn't a point worth making, much less arguing.

Those who insist on seeing the world as it is are chagrined to find their pre-election fears confirmed: Even in the hands of the most gifted politician imaginable, a go-it-alone presidency is impossible. Our system does not permit such a thing.

Trump, not the most gifted politician, has taken just one month to prove the self-destructive power of a go-it-alone presidency that exhausts the public with dramatics and that can't seem to conceive of an approach more subtle than a frontal assault when dealing with other branches of government, the federal bureaucracy, the opposition party and the media.

The Democrats, the media and the squalling children with their protest signs will never let this month go. It's going to be Groundhog Month. No matter how much Trump and his acolytes learn, and they can learn; no matter how much good they do, and they may yet do good; no matter how different his administration may look at the end from how it looks today, today is what the public will hear about forever.

This is by no means a declaration of the Trump presidency's death.

He still has cards to play. He still has power that he can exercise all on his own. He still could sort out the disarray among his counselors -- preferably by getting rid of some and by molding those who remain into a clearly delineated chain of authority.

He still could establish a coherent policy message based on clearly articulated, rationally prioritized, detailed goals. He still could develop a mature approach to the presidency that recognizes the powers and duties of the other branches of government and accepts the limits, both constitutional and practical, to his own power.

But even to the extent that such a miracle might happen, Americans will be hard-pressed to learn of it.

For the eight years of Obama's presidency, the media -- conservative and liberal -- were obsessed with the question of whether the president would get what he desired. In the mainstream media, Obama was the hero and those who would deny him the prize of the moment were the villains. Neither the details nor the implications of a given policy really mattered. If

If Obama lied about the aims and effects of the Affordable Care Act, for instance, that was covered as far less important than whether his side would win or lose.

For the duration of Trump's presidency, the question at the center of mainstream coverage will be the same -- will the president get what he wants? -- but the roles of heroes and villain will be reversed.

When Trump has a bad week -- and chances are he'll have many, because he's not very good at the some of the most public aspects of his job -- it won't spell the end of his presidency. It will be portrayed that way, though. Over and over.

The challenge for Americans is to maintain their perspective while, for yet another four years, politics is covered as soap opera.