Could hops be Florida's next big crop? Researchers aren't so sure yet

WIMAUMA - The King of Beers is not at risk of being dethroned, but its reign is looking shakier.4 Months Ago7 Months Ago5 Months AgoUniversity of Florida Institute of Food and Agricultural Sciences researchers are in the second year of a $158,000 grant from... 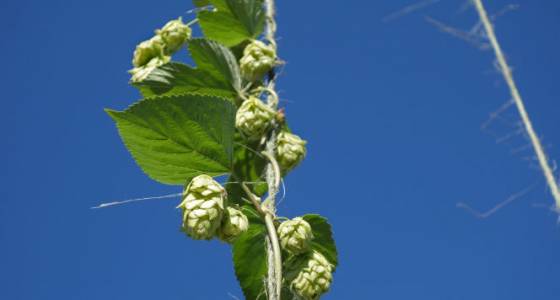 WIMAUMA - The King of Beers is not at risk of being dethroned, but its reign is looking shakier.

University of Florida Institute of Food and Agricultural Sciences researchers are in the second year of a $158,000 grant from the Florida Department of Agriculture and Consumers Services to develop a viable hops crop that could work in the Sunshine State — and local craft beer brewers are taking notice.

Right now at the Gulf Coast Research and Education Center in Wimauma, the researchers are gearing up for a next planting. Tiny seedlings grow under lights in a stark white laboratory. In another space, on a long shelf near a window, slightly larger plants have been potted in soil, zip-top baggies popped over their shaggy green heads to preserve moisture. And out in the hops field, the post-and-trellising and irrigation systems await this season's assay.

In Florida, there are more than 110 operating craft breweries, the industry having a $2 billion-a-year impact on Florida's economy, according to the Brewers Association. And independent craft breweries now represent 12 percent of the beer industry as a whole.

The growth of craft beer in this state has been fostered by an open dialogue between brewers, innovative industry partnerships and the public's growing commitment to supporting and celebrating local breweries.

There's only one problem: ingredients.

Currently, Florida craft brewers import more than 2 million pounds of hops and hop products annually from places like Washington, Oregon and Germany. Yes, Florida has water. But grains like malted barley and hops that are crucial to beer-making? Not so much.

At least, not yet.

Zhanao Deng, a principal investigator and professor of environmental horticulture who works at the Wimauma facility, said the idea to grow Florida hops wasn't theirs.

"Simon Bollin, who is the agribusiness development manager for the Hillsborough County Economic Development, came to the center and said, 'There are so many microbrewers in Florida now, what if you could develop hops that would work here?' " Deng said during a recent visit to the hops field.

Growing hops, Deng said, is an effort to stay relevant.

It hasn't gone smoothly. In their first trial, they received rhizomes, or plant shoots, from a company in Michigan that they believe were infected with a virus. This season, they are starting over with plant tissue cultures, which produce clones of a plant. The problems, said Deng and Agehara, also have to do with Florida's climate.

Most hops are grown in Oregon and Washington, places that have cool weather and long days, which affect the flowering of the plants. In Florida, shorter days trigger the plants to flower prematurely, so the scientists have experimented with artificially extending the day length with LED lights.

Deng is working with 13 varieties of hops, while Agehara is tinkering with two different planting densities (how closely things are planted) and two levels of fertilization. They have their own plot of land, which has 25-foot posts, big as telephone poles, that support a vertical trellising program. But they also work with 10 growers in Florida who are experimenting with hops. Together they are developing recommendations on the varieties that are most suitable in the state, proper nutrient management, how close to plant the plants and details like how much water is best.

Could hops be Florida's next big thing, the plant that the beleaguered citrus farmers could turn to? Deng and Agehara said it's too early to tell.

"The major limitation is climate," Agehara explained. "The plants produce flowers when they are immature (before the plant has enough height and heft to support them), and it's impossible to do a single harvest (which drives up harvesting costs)."

The researchers' funding ends in December, and they have just submitted a proposal for additional funding to test different varieties and the LED lighting so that plants can reach their maximum size. They are also hoping to spend more time looking at potential pests like nematodes.

For now, though, it's clear that interest from the brewing community is high. The Bailey family of Coppertail Brewery Co. and Crooked Can Brewing Company in Winter Garden have donated cash to the project. Cigar City Brewing has donated cash, utility poles and planting stock. Hopsteiner, a leading grower of beer hops since 1845, has contributed plant stock.

From their first crop, the UF Institute of Food and Agricultural Sciences researchers gave 30 pounds of hop cones to local brewers, one of which was 3 Daughters Brewing in St. Petersburg. What did they do with the bounty? It immediately went into their Blonde Ale, "dry hopped with Florida hops."