WASHINGTON - U.S. Sen. Cory Gardner has a modest proposal for the Twitter account of President Donald Trump.Instead of getting him to stop Tweeting - as even some of his supporters have suggested - Gardner wants to equip his account with a pause feature -... 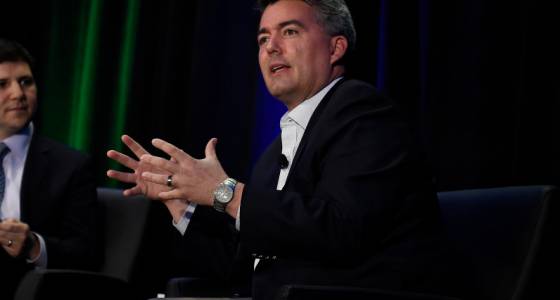 Instead of getting him to stop Tweeting - as even some of his supporters have suggested - Gardner wants to equip his account with a pause feature - a tool to give Trump an hour to think about his tweets before he launches them.

“Maybe there is a need for a little bit of delay before that send button gets hit,” Gardner said.

It’s an idea that’s more wishful thinking than actual reality. But for lawmakers such as Gardner, a Republican senator in a state won by Hillary Clinton, there is a certain appeal to putting some distance between Trump’s rhetoric and Colorado voters - especially since Gardner has come under significant pressure from constituents and liberal activists since Trump took the oath of office Jan. 20.

The new president, through Tweet, speech and executive order, has rampaged his way through his first month in office - eliminating any doubt that his time in the White House would be any different than the 2016 presidential campaign.

This rapid-fire approach, which includes a controversial travel ban and crackdowns on immigration and federal hiring, has put pressure on Senate Republicans accustomed to a more deliberate pace, and Gardner in particular. Not only does Trump add an unpredictable variable to Gardner’s own political fortunes, but Trump is certain to have an outsized impact on the 2018 midterm elections.

That’s significant for Gardner because the first-term senator has been given the job of keeping the upper chamber in GOP control as the new head of the National Republican Senatorial Committee, a campaign and fundraising arm of the party.

Over the next few months, Gardner will have to decide when the party will embrace Trump - and when it won’t. The result is that Gardner, perhaps more than any other Republican senator, is the lawmaker to watch to best understand the lengths to which the GOP establishment will ally itself with Trump, the person, even as it tries to find common cause with his administration and specific policy goals such as the repeal of the Affordable Care Act.

A recent example is the travel ban that Trump tried to impose on several predominantly Muslim countries. Gardner took the side of Senate Republicans such as John McCain of Arizona and Bob Corker of Tennessee in criticizing the move - a departure from the support touted by lawmakers such as U.S. Rep. Doug Lamborn, R-Colorado Springs.

Conversely, Gardner has joined Trump in advocating for a repeal of the Affordable Care Act, known broadly as Obamacare. “It’s time to fix our broken health care system and evaluate and implement ideas that will empower patients,” said Gardner in a statement at the time he backed the nomination of Tom Price, an Obamacare critic and Trump’s pick to lead the U.S. Department of Health and Human Services.

The stance has put Gardner at the center of the ongoing debate on what to do with the health care law, which past Colorado leaders fully embraced as policy and was a key factor in the state slashing the number of residents without health insurance from nearly 15.8 percent in 2011 to 6.7 percent in 2015, according to the Colorado Health Institute.

Trump and other Republicans see the act as unwieldy and expensive, and they are trying to craft an alternative that’s more business-oriented.

In the political arena, one factor in Gardner’s favor is that the 2018 electoral map is very favorable for Republicans - so much so that Sabato said it is not inconceivable that Gardner could help the GOP transform its 52-seat majority in the Senate into a 60-seat powerhouse that could override any Democratic filibuster and turn Washington into a wish factory for GOP ideas.

In one sign of support, Gardner and the NRSC raised an estimated $4.2 million in January, outpacing their Democratic counterparts’ haul of $3.6 million.

As for his own future, Gardner and Trump are on pace to appear together in more than three years on the 2020 ballot - an eternity in U.S. politics. But the current political landscape suggests Gardner has a tall mountain to climb in a state that gave Clinton a nearly 5 percentage point win over Trump in 2016.

“We have never been as polarized since the Civil War,” Sabato said. “And that is bad news for people like Cory Gardner.”

Upping the ante on Gardner is the near-constant pressure that Colorado liberals and Democrats have levied against him since the start of the administration. His office and inbox have been flooded with calls and e-mails, and activists have demanded he hold public town halls that the senator has so far declined to hold - all while protesting his state offices and even a recent trip Gardner took to the airport.

“At this point, Gardner's evasions and excuses are doing more harm than good,” said Ian Silverii, executive director of ProgressNow Colorado, in a statement. “It’s time for Gardner to stop insulting the intelligence of the people who elected him and face his constituents.”

On Friday, activists held a "With or Without You” town hall meeting of their own at a Denver middle school.

Gardner's office issued this statement from the senator late Friday: “Throughout the week, I traveled across the Eastern Plains and the Front Range and had the opportunity to meet with and speak to hundreds of Coloradans and discuss issues ranging from the challenges facing the agriculture community to reforming our health care system. I sincerely value the thoughtful and productive discussions I had this week, and I’m grateful when my constituents contact me to express their thoughts and concerns because their feedback allows me to do my job best and develop legislative solutions that benefit Coloradans."

During the 2016 presidential campaign, Gardner was more of a bystander than a foot soldier to the Trump campaign - ultimately deciding in October that he wouldn’t vote for him after a video surfaced of Trump making vulgar comments about women.

And Colorado, too, was resistant to Trump among Republican circles - both in leading the anti-Trump movement at the Republican National Convention and supporting U.S. Sen. Ted Cruz during the GOP presidential contest.

Still, Gardner has faced pressure, too, from empowered Trump supporters in the state. Asked about Gardner, Robert Blaha, who served as chairman of Trump's Colorado campaign, spoke positively.

“I think Cory is an incredibly talented guy who is trying to decide how is he going to work with the administration. And I think time will tell,” Blaha said. “My opinion is that I believe this will be a very successful administration and I believe the people associated with this administration will reap the successes of being a part of this.”

But there also remains a general distrust of the political establishment. In a Facebook post launched Thursday, Blaha warned of the “Entitlement Permanent Political Class.”

“We finally have a President that has the guts to make tough decisions, stand up to the resistance and move America forward,” Blaha wrote. “Unfortunately, most of Congress has little to offer except making noise and knowing how to move up the bloated political chain. We need to totally clean up this entire group (Both sides of the aisle).”

How Gardner navigates the competing interests will test the limits of a politician who has made a career of sunny sound bites and the kind of dealmaking that comes from handshakes and not hand grenades.

So far, he has backed all of Trump’s Cabinet nominees, including controversial picks such as Betsy DeVos for education secretary, while at the same time urging Trump to take a tougher global stance on Russia.

At the same time, Gardner’s office on Friday was left puzzling on what to do with recent remarks from the White House that suggested recreational marijuana, legal in Colorado, would be subject to “greater enforcement.”

Gardner won’t say how he thinks all of this could affect his own chances down the line. “I’m not going to even speculate about 2020,” Gardner said.

But he has not given up on his half-joking Twitter plan for Trump.

“This president has understood, far better than anybody, new ways to communicate with the American people,” Gardner said. “And he’s incredibly effective at communicating. And that can work in his favor and that can create disruption.”