The two men killed Monday morning in a single-engine airplane crash Culver Reservoir southwest of Berthoud have been identified by the Larimer County Coroner's Office. Patrick Blankemeier of Arvada, 58, and James P. Griffith of Denver, 23, both died from... 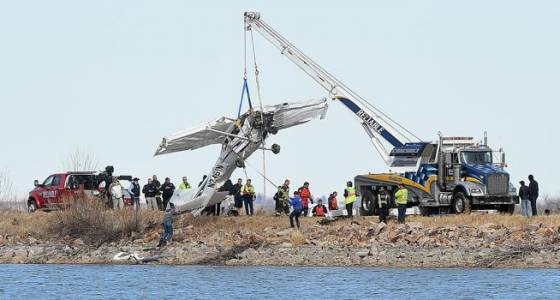 The two men killed Monday morning in a single-engine airplane crash Culver Reservoir southwest of Berthoud have been identified by the Larimer County Coroner's Office. Patrick Blankemeier of Arvada, 58, and James P. Griffith of Denver, 23, both died from from blunt-force injuries.

Blankemeier is listed as a chief flight instuctor for McAir Aviation on the McAir website, where the Cessna 172 was registered. The aviation company is based in Broomfield and trains people to fly Cessna airplanes.

Staff at McAir declined to comment at this time.

As of Tuesday morning,  the National Transportation Safety Board had no further information on the crash or who was at the controls at the time.

"That will be part of our investigation," said NTSB spokesman Keith Holloway.

The men were in the icy water for about 50 minutes, said Stephen Charles, Berthoud Fire and Rescue chief.

"We had area neighbors who witnessed the crash," Charles said.

From what Phelton was told by those at the scene, the plane nosedived into the water. Its crumpled fuselage was lifted from the water about 4 p.m.

David Moore, public information officer for Larimer County Sheriff's Office, said at a press conference Monday that the Federal Aviation Administration and the National Transportation Safety Board were notified and will investigate.