Copy this: Vatican stakes out rights to Pope Francis' image

VATICAN CITY -- God's love may be free, but the Vatican says it has a copyright on the pope.Unnerved by the proliferation of papal-themed T-shirts, snow globes and tea towels around the world, the Vatican has warned it intends to "protect" the image of... 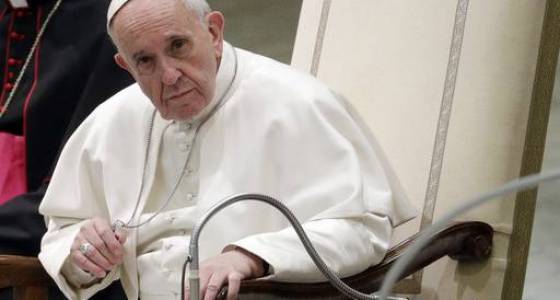 VATICAN CITY -- God's love may be free, but the Vatican says it has a copyright on the pope.

Unnerved by the proliferation of papal-themed T-shirts, snow globes and tea towels around the world, the Vatican has warned it intends to "protect" the image of Pope Francis and "stop situations of illegality that may be discovered." It also wants to protect the crossed keys emblem of the Holy See.

"The secretary of state will undertake systematic surveillance aimed at monitoring the way in which the image of the Holy Father and the emblems of the Holy See are used, intervening with opportune measures when necessary," the Vatican said in a statement.

To back up this declaration, the Vatican has hired the global law firm Baker McKenzie to protect its intellectual property rights, the Italian daily Corriere della Sera reported. without citing the source of the information. Baker McKenzie declined to comment.

The threat of enforcement marks a sea change for a church that for some 2,000 years has seen popes venerated on all manner of flags, banners and medals. But the popularity of Francis and the ease with which his image can be copied in the internet age has spawned a flood of papal trinkets, causing the Holy See to worry that they are losing control of his image.

"The pope's image rights are no different from those of any other famous celebrity and so it's not surprising that the Vatican is giving notice that it will protect its (intellectual property) rights as necessary," said Nick Kounoupias, the founder of an intellectual property consultancy in London. "What will be interesting to see, however, is how vigorously these rights are pursued, given who the IP owner is."

Francis' many travels have taken him to countries like the Philippines and Sri Lanka, where factories can quickly churn out pope hats, T-shirts and towels. Vatican officials have grown fearful the faithful will think that the church is making money off the merchandise, experts say. Worse still, they see the conditions in which some of the items are made and worry about being associated with labor abuses.

The decision reflects an evolution in the last decade as the Vatican adapted to modern markets. While in the past the Holy See might get word of improper use of the pope's image through local church organizations around the globe, the approach was random.

"It's not new that people were selling T-shirts of the pope, but (previously) those were probably little local vendors," said Mark McKenna, an intellectual property expert at the Notre Dame Law School in Indiana.

What's changed is the magnitude of what can be produced and how quickly it can be distributed through online platforms.

"In a world of Etsy, you are able to do it on a bigger scale," he said.

Although the Vatican did not elaborate on how it would crack down, the warning seemed a pre-emptive move to explain why the Vatican is going after the unauthorized commercial uses of the pope's image. There was no immediate indication that souvenir buyers would risk fines or legal action.

It's not as if the church refrains from selling its own pope-themed material.

On the Vatican website, one can buy Francis medals, icons and rosary boxes. The Vatican museum boutiques offer silk ties and scarves and watches showing scenes from Michelangelo's frescoes on the ceiling of the Sistine Chapel. And that may be part of the Vatican's motivation in safeguarding Francis' face - and warning that they will challenge the copycats.

"It's probably also the case that there is some genuine commercial motivation," McKenna said. "They want to be sure they're the only ones selling this stuff."