Conway on 'couchgate:' 'I clearly meant no disrespect'

Kellyanne Conway has broken her silence on Tuesday's social media-fueled scandal, "couchgate." The twittersphere lit up soon after a series of photos had been released of President Donald Trump's adviser perched on her knees on an Oval Workplace couch... 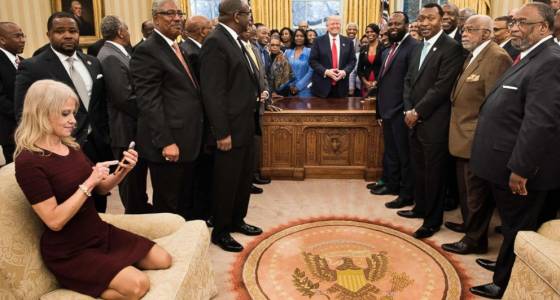 The twittersphere lit up soon after a series of photos had been released of President Donald Trump's adviser perched on her knees on an Oval Workplace couch with her feet behind her and her shoes on. Some pictures show Conway leaning over to take a photo of leaders of historically black colleges and universities who had gathered in the Oval Workplace to meet with the president.

The pictures ignited a debate about decorum in the White Residence, and Conway's respect for the office of the president.

"Kellyanne Conway is treating the Oval Workplace like her personal living area," tweeted actor George Takei, an outspoken Trump critic. "Looks like she's settling in for a evening of binge-watching Scandal.

In an interview with Fox News Tuesday night, Conway explained, "I was asked to take the picture. We had a crowded area. We never ever had so several people in the Oval Workplace in this young administration gathering of guys females at a single time to take a picture. There was literally nowhere to stand. The press had come in. A couple of them had asked me to take photographs and text it to them proper away. And I did that. I just snapped at that angle. I needed to get the much better angle ... Then I texted it to a few of them and then it was more than in a matter of quick moments."

"I, of course, respect the office of the president and its existing president," she said. "I am glad there is such a renewed interest in displaying respect for the workplace of the president. I of course meant no disrespect. I am constantly amazed what basically qualifies as news on a day when there is so a lot of it."