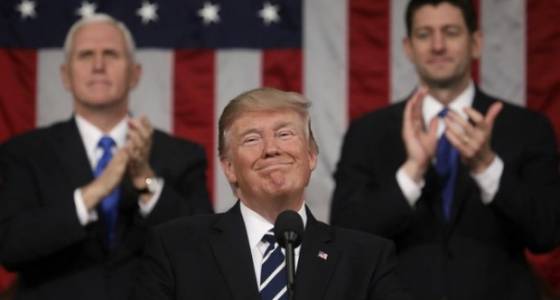 "I thought the president delivered a good speech tonight," U.S. Sen. Rob Portman, R-Ohio, said. "I thought he was particularly good in talking about some of the problems we face as a country and how we need to work together as Republicans and Democrats alike to solve those problems."

My reaction to #POTUS's #JointAddress: pic.twitter.com/6nOhVvsm7l

In a statement on Twitter, U.S. Rep. Dave Joyce, R-Ohio, said Trump "laid out a strong vision," citing secure borders and a focus on American manufacturing.

House Speaker Paul Ryan, R-Wis., was even more effusive in his praise of the president's speech.

"That was a home run," Ryan said in a statement afterward. "President Trump delivered a bold, optimistic message to the American people.

"From repealing and replacing Obamacare to revamping our outdated tax code and keeping our country safe from the threat of radical Islam, we are committed to working with the Trump administration to deliver results."

U.S. Sen. Orrin Hatch, R-Utah, said having Trump in the White House and Republicans controlling both the House and Senate presents an opportunity for the GOP.

"I am eager to lead the fight for our values and rack up big wins for conservative causes," Hatch said. "I look forward to working with our new president, to fulfill our promises, and I applaud him for his leadership."

"The president's speech was utterly disconnected from the cruel reality of his conduct," Pelosi said in a statement. "The Trump Administration has spent 40 days putting Wall Street first, making America sick again, sowing fear in our communities, and ensuring Russia maintains its grip on our security and our democracy."