MOSUL, Iraq >> The Iraqi advance into Mosul’s western half slowed Saturday as combat turned to urban warfare and Iraqi forces met stiff resistance from the Islamic State group. Hundreds of civilians poured out of Mosul on foot following the advances,... 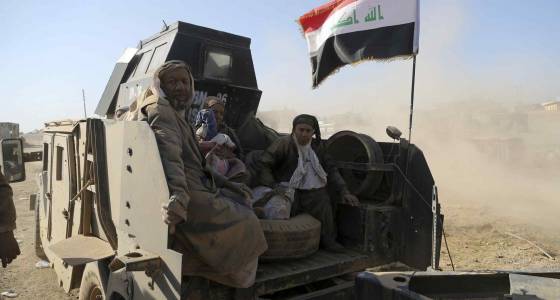 MOSUL, Iraq >> The Iraqi advance into Mosul’s western half slowed Saturday as combat turned to urban warfare and Iraqi forces met stiff resistance from the Islamic State group. Hundreds of civilians poured out of Mosul on foot following the advances, but the vast majority of 750,000 estimated to still be in the city’s west remain trapped, and describe deteriorating humanitarian and security conditions.

Special forces Lt. Gen. Abdul-Wahab al-Saadi said that his troops are “moving very slowly” and that IS fighters are responding with car bombs, snipers and dozens of armed drones.

The drones have caused relatively few deaths, but have inflicted dozens of light injuries that have disrupted the pace of ground operations.

Similar to the way operations inside eastern Mosul initially unfolded, in west Mosul, IS repeatedly brought Iraqi convoys to a halt Saturday with small teams of one or two men and a handful of car bombs.

Al-Saadi said the Mamun neighborhood was particularly difficult because its streets are not organized in a grid. “The roads are random,” he said, which makes it more difficult for his men to set up roadblocks to stop car bombs, a difficulty that foreshadows obstacles Iraqi forces expect to face in the narrow alleyways of western Mosul’s historic district.

But al-Saadi said he expects the pace to increase after Iraqi forces retake territory and infrastructure on Mosul’s southwestern edge — which will allow them to shorten supply lines and link up with forces in the city’s east.

Along the road beside al-Saadi’s base of operations, hundreds of civilians fleeing Mosul walked slowly past, many with sheep, cows and goats in tow. Nearly all of the hundreds who fled Saturday trekked more than five kilometers from the city’s edge to a small village serving as a screening center.

Dozens of families gathered against a crude cinderblock wall at the screening center south of Mosul. Intelligence officials at the site said after documents were checked families would either be moved into nearby abandoned houses or newly erected camps for the displaced.

Many of those fleeing said they were from villages outside Mosul and had been forced to march to the city more than four months ago to serve as human shields.

“We’ve been through terrible times,” said Juri Fathi, a mother of six who was forced to live in a school in Mosul for three months. “I had to burn my children’s clothing just for warmth.”

Fathi held her youngest child — a four month old boy — in her arms as she spoke. She said he was born in an abandoned home between her hometown of Hamam al-Alil and Mosul as she was being led on the forced march by IS.

“I named him Mussab (or difficult),” she said, “for these tough days.”

Groups of men were screened at the site against a database of IS suspects and two prisoners were dragged past the crowd and into an abandoned building.

“We brought them directly from inside Mosul,” said an Iraqi special forces solider from inside the Humvee that delivered the detainees. He spoke on condition of anonymity in line with regulations. “They were shooting at us, I saw them with my own eyes,” he said.

Iraqi forces declared eastern Mosul “fully liberated” in January after officially launching the operation to retake the city in October.

A former Iraqi army lieutenant colonel and specialist in land-attack missiles, who used the nickname Abu Karim fearing for the safety of his family, spoke to The Associated Press by phone, describing a “deteriorating security and humanitarian situation” inside western Mosul.

“I’m hiding in my house, and my wife lives in constant fear of Daesh raiding our home,” said Abu Karim, using the Arabic acronym for the extremist group.

Abu Karim said IS fighters have been setting up checkpoints and storming homes to crack down on informants, meting out punishments for anyone carrying a mobile phone or found with an internet connection that include flogging, jail time, and fines.

“(IS) tried to recruit me because of my expertise in missiles. But I told them I fought in the war against Iran and the Americans, and couldn’t fight anymore. They took me before a judge and he let me go with a $500 dollar fine,” said Abu Karim. He added that some IS fighters were fleeing to the north of Mosul, and that the city’s residents would welcome the arrival of the counterterrorism force and the federal police.

Meanwhile, the Saudi Foreign Minister was in Baghdad Saturday — the first high level visit of a Saudi official to the country since the 2003 U.S.-led invasion — to meet with his Iraqi counterpart, Ibrahim al-Jaafari, and Prime Minister Haider al-Abadi.

In a statement issued by the foreign ministry, al-Jaafari said the visit was to discuss cooperation in combating terrorism, adding, “The ties that bind are many, and the visit comes to restore bilateral relations to their correct course.”

The statement also called on Saudi Arabia to reiterate its position against Turkish ground troops in Iraq.