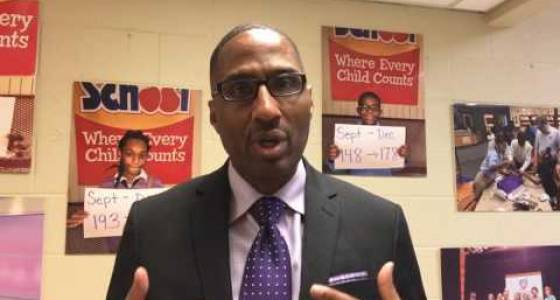 Arnold Pinkney (left) and the Rev. Otis Moss Jr. were longtime supporters of civil rights causes. They are shown here at a service at Olivet Institutional Baptist Church in Cleveland in 2008, Chris Stephens/The Plain Dealer

Those aren't new requests. Reed has been asking for a school named for Pinkney for three years, and he first asked to name a school for President Obama in 2008.

Reed renewed his request to the school board last week, proposing to re-name the Miles elementary school on the east side after Pinkney, a former school board president and nationally-known political strategist.

Pinkney was school board president from 1971 to 1978, when desegregation was a contentious issue being fought in the courts. The 1996 district tax campaign and a 2001 campaign for a school construction tax were considered long shots that Pinkney is widely credited with winning for the district,

"It would be fitting to say thank you to Arnold Pinkney and his family for what he put in for education for the city of Cleveland," Reed said.

Reed also wants to rename Nathan Hale elementary school, also on the East Side, for Obama. He said it would be fitting to name that school on Martin Luther King Boulevard after the former President, as another icon of the black community.

Reed has wanted a school named for Pinkney since he died in early 2014, but the district has not given him a clear answer on his request. Reed pressed the school board for an answer last week and criticized the delay.

District CEO Eric Gordon said after the meeting that the district has many requests to re-name schools and needs a policy for handling them. He said he and staff have been drafting a policy and hoped to have one this spring, but extended contract negotiations with the Cleveland Teachers Union have delayed it.

He said the board may discuss it at a retreat this coming weekend.

Reed, though, said that the district has had more than enough time to set a policy.

He said his request to name the Miles school after Pinkney should be easy. The school, he said, is simply named after Miles Road and there is the similarly-named Miles Park school nearby.

The Nathan Hale school is named after a Revolutionary War soldier caught spying by the British and hanged in 1776. He is credited with saying at his hanging that "I only regret that I have but one life to lose for my country."

At least a dozen schools nationwide have been named for Obama, including Barack Obama Elementary School in Maple Heights.