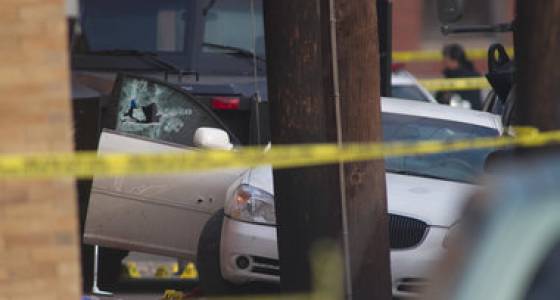 The officer was shot in the leg and his injuries are minor, police said. He was treated and released from MetroHealth.

Two armed men refused to exit their car outside Magic City strip club, according to police. A SWAT tank rammed the car at one point and shots were fired, police said.

Dozens of Cleveland, Cleveland State and RTA police, along with Cuyahoga County Sheriff Deputies swarmed the area for hours.

Police said the standoff ended in the arrest of two people about 7:30 a.m.

Cleveland police and Cuyahoga County Sheriff SWAT tanks are still at the scene. One is still up against a white Buick that the tank rammed during the standoff.

Detectives have marked more than 60 pieces of evidence at the scene. The officers are also searching the car involved in the standoff.

Police have not said what led to the standoff.