By MARK SATOLA CLEVELAND, Ohio - At his Severance Hall appearance Thursday night with the Cleveland Orchestra, French pianist Cedric Tiberghien demonstrated the qualities that have made him an artist worth following. He has, of course, technique to burn,... 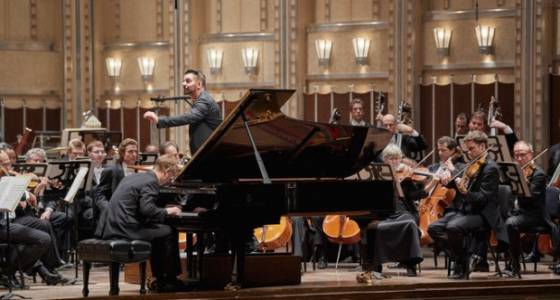 CLEVELAND, Ohio - At his Severance Hall appearance Thursday night with the Cleveland Orchestra, French pianist Cedric Tiberghien demonstrated the qualities that have made him an artist worth following.

He has, of course, technique to burn, as shown in his electrifying reading of Saint-Saens' Piano Concerto No. 5, which he traversed with elan and a palpable sense of joy (and nary a false note) in the work's intricate, high-speed passage-work. The range of color he drew from the monochromatic instrument was remarkable.

What's more, Tiberghien brought interpretive depth to a work that plumbs no great depth but rather presents a sort of proto-cinematic travelogue. Nicknamed the "Egyptian," the concerto celebrates Saint-Saens' pleasure in the Mediterranean coast of Africa, his favorite vacation destination, and is full of Romantic oriental touches (of the sort explored later by Jacques Ibert in "Escales").

Its second movement plunges into a nocturnal world of mystery and flashing light, with unusual scales and cunning keyboard effects. Tiberghien threaded this episodic fantasy into a convincing whole through the strength of his artistry and intelligence. The finale was full of keyboard pyrotechnics that Tiberghien brought to vivid life with energy and style.

Guest conductor Matthias Pintscher opened this anything-but-standard program with his own "Ex Nihilo" ("Out of Nothing"), a short, attractive exercise in post-Boulez sound-sculpting for large orchestra. Its straightforward procedures -- the fabric of the piece slowly weaves itself together from seemingly random sounds -- meant that one hardly needed to know anything about the work's origins in jet-lag disorientation to "get" the music.

Rarely rising above pianissimo, and only occasionally employing the full orchestra, "Ex Nihilo" was a pleasant wake-up call that, for all its disembodied fragments of sound (and its startling, percussion-driven outbursts), felt familiar and almost traditional.

The second half began with another rarity: the tough-minded Chamber Concerto No. 2 by Schoenberg. Though that name sets some listeners quaking with fear, this particular work resides in the tonal portion of Schoenberg's catalog. Nevertheless, the composer's trademark chromaticism and dense contrapuntal procedures come fully to the fore.

Pintscher navigated this dark thicket of music with confidence and the interpretive will required to hold together all its disparate elements. The flute plays a central role in the ultimately tragic work, and principal flutist Joshua Smith found the right muted tone for his instrument.

Pintscher was a protege of Pierre Boulez and is now principal conductor of the Lucerne Festival Academy in Switzerland, a summer festival school for modern music. One might therefore expect that his reading of Debussy's "La Mer" would follow his mentor's mode.

This was not the case. Thursday night, Pintscher presented a wholly personal reading of Debussy's well-known masterpiece.

More muscular and vigorous than Boulez's interpretation, Pintscher's account of "La Mer" combined fierce attention to detail with exceptional energy and, in the hair-raising climaxes, a grand Romantic sweep. Pintscher was especially effective in the pointillistic second movement, "Play of Waves," where seemingly disparate fragments swirl together into energetic focus only to swirl apart again in shimmering threads.

The orchestra was in excellent form here, and the result was further proof that it's possible to carry off a full and satisfying program without a single war-horse by Mozart, Beethoven, or Brahms.