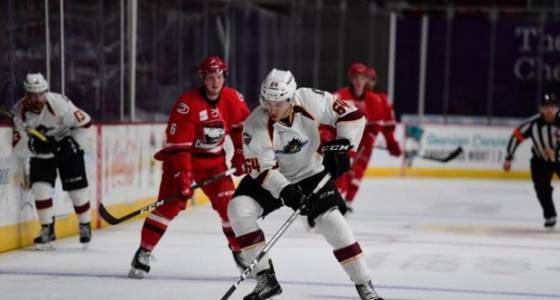 Cleveland was trailing the Charlotte Checkers 4-0 in the second period Saturday night when the Monsters lifted goaltender Brad Thiessen for Anton Forsberg. Less than 30 seconds later, Charlotte's Kris Newbury beat Forsberg on the first shot he faced, making it 5-0.

Cleveland's Jordan Maletta snapped the shutout at 17:33 of the second period, with a deflection fed by Daniel Zaar, but it would be Cleveland's only goal in a 6-1 loss to the Checkers at the Bojangles Coliseum in Charlotte.

The second loss to Charlotte in two nights dropped the Monsters to 24-23-3-4, concluding their season-long seven-game road trip with a 1-5-1-0 record. In sixth place in the AHL Central Division, they return home to The Q for a single game against the first-place Grand Rapids Griffins at 7 p.m. Tuesday.

Charlotte built a 2-0 lead in the opening period on back-to-back even-strength goals from Jake Chelios at 4:35 and Dennis Robertson at 15:51.  Two more even-strength goals in the second period, from Lucas Wallmark at 1:54 and Patrick Brown at 2:24, ended Thiessen's night between the pipes.

Newbury's marker ended the scoring for Charlotte until Wallmark notched his second goal of the game at 15:00 of the third period.

The veteran Thiessen took the loss after stopping seven of the 11 shots he faced, falling to 2-5-1 on the season. Forsberg saved 19 of 21 shots he faced in relief. Charlotte's Daniel Altshuller stopped 26 shots, improving to 4-3-0.

Cleveland and Charlotte were both 0-for-3 on power plays.