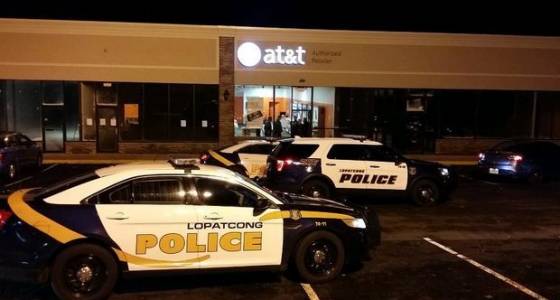 The robbers showed a gun and forced the employee to the back of the store, where he was restrained and told to stay put. The robbers at some point placed the gun at the employee's back, Bisci said.

The thieves then stole several cellphones, merchandise and an undisclosed amount of cash, Bisci said. The employee was unsure where the robbers then fled and in what direction.

There were no patrons in the store at the time of the robbery and no reported injuries with the exception of minor injuries the clerk suffered being restrained, Bisci said.

WATCH: Know these 2? Verizon robbers at large in Slate Belt

The robbers fled in a stolen 2003 silver Infiniti, which later was recovered in Easton. Bisci said the vehicle is believed to have been stolen from New York, but came back registered to a New Jersey car dealer.

More evidence is being recovered in a joint investigation by the Lopatcong Township police department and the Warren County Prosecutor's Office. Store surveillance footage also is being obtained, Bisci said.

Police are investigating all five robberies -- Palmer, Forks, Bethlehem Township, South Whitehall of Wind Gap -- and piecing together if they are connected. There are similarities in all five incidents and no suspects have been caught in either.

A Verizon store robbery in Forks Township on Oct. 29 was tied to the Nov. 21 killing of Michael Davis outside his Palmer Township home.

The 25-year-old worked at the store, 301 Town Center Blvd. The store manager reported he was assaulted and abducted Nov. 22 outside his home, also in Palmer. In both Palmer incidents, the assailants were two men.

Then the night of Jan. 5, the AT&T Authorized Retailer at 3859 Nazareth Pike in Bethlehem Township was robbed by two men, one of whom brandished a handgun, according to police. Police after that robbery said they were investigating to see if it was tied to the Forks Township crime.

On Jan. 16, two men armed with handguns and dressed in dark clothing entered the Cellular Connection store about 8:06 p.m. p.m. at 3075 Tilghman St. in South Whitehall Township, police said. The men there also forced employees into an office area and made off with an undetermined amount of merchandise, police said.

They fled to Easton's West Ward but were able to walk away from a silver Hyundai, which was parked in the Spruce Street alley.

A Wind Gap Verizon store was robbed at 10:48 a.m. Feb. 9, with Slate Belt Regional police confirming it involved two robbers and a clerk who was tied up in a back room.

The suspects in the Wind Gap robbery are described as one being 5 feet, 8 inches in height and the other, 6 feet, 2 inches in height. Both wore ski masks over their faces.

Store surveillance footage shows one suspect wearing a white hooded sweatshirt and light pants and the other, a green sweatshirt with a dark hood.