Clean water: it's complicated, too

Donald Trump drew some guffaws Monday when, in responding to questions surrounding the Republican alternative to Obamacare, he told reporters "nobody knew that health care could be so complicated." The humor is in his naivete: It's not unreasonable... 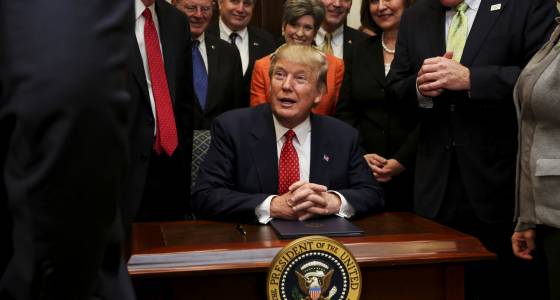 Donald Trump drew some guffaws Monday when, in responding to questions surrounding the Republican alternative to Obamacare, he told reporters "nobody knew that health care could be so complicated." The humor is in his naivete: It's not unreasonable to expect the president of the United States to have known a thing or two about a subject of intense public interest back when he was making grandiose statements during the campaign — but veteran political observers know it's hardly unusual for the boisterous on the stump to be proven shallow in the office. Those elected to leadership show up wholly unprepared for the reality of their jobs all the time.

So if Mr. Trump can be instructed on Obamacare, can he learn about Mother Nature? Apparently not. On Tuesday, President Trump signed an executive order calling on the U.S. Environmental Protection Agency and the U.S. Army Corps of Engineers to reconsider the Waters of the United States rule. It was one of the signature environmental achievements of President Barack Obama's time in office — regulations clarifying the Clean Water Act's authority to protect headwaters, streams and wetlands — but the rules have been held up by legal challenges.

Here in Maryland, we know a thing or two about clean water and the complexities of how best to protect it. It's one of the advantages of having the nation's largest estuary in our backyard — and sharing that resource with a handful of other states. We have become educated on the ins and outs of water resources like insurance executives get to know health care costs. Water doesn't respect state boundaries, and it doesn't magically show up at the mouth of the Susquehanna River; protecting this vital resource begins on the land, perhaps in New York or Pennsylvania, that drains into a ditch that feeds a brook that branches into a stream and on and on.

How is this complicated? It means that if we want to protect our drinking water supply, for example, we can't just regulate Maryland polluters, we have to rely on states and local governments upstream to take steps like making sure developers aren't creating excess stormwater runoff that turns streams brown with sediments or that farmers are not spreading so much manure on their land that nearby rivers are choked with algae. Sometimes, states take sufficient action on their own, sometimes they do not. It is essential that the federal government be prepared for that latter circumstance.

Mr. Trump and the Republicans have cast the federal government generally, and the EPA most specifically, as the villain in a simplistic view of environmental protection. They see only the cost of requiring farmers to contain manure or developers being denied carte blanche to pave land or build a shopping center while not understanding the cost of the harm these things cause. And so rolling back the rules on water protection (or those regulating coal-fired power plants and their greenhouse gases, which are thought to be next up to bat) is perceived as good for the economy without regard to the degree to which it is a matter of cost-shifting and not cost-saving. And this is where there truly is a nexus with health care: part of that cost is in human health, higher medical bills and shortened lives.

If the Chesapeake Bay cleanup is to succeed, the EPA needs to have the authority to instruct states to meet Clean Water standards. Tuesday's executive order doesn't kill the Waters of the U.S. rule, it merely starts the process of its potential demise, which could take years. Perhaps in the meantime, Mr. Trump and members of his party can be educated on the importance of the regulation and how it can help make water just a stone's throw from the White House clearer, cleaner, safer and more supportive to aquatic life. That the president, in signing his executive order, called it a "horrible, horrible rule" and appears intent on reducing EPA funding by as much as 25 percent makes that scenario appear unlikely, but hope springs eternal.

Taylor Sprague was 21 when she died of a heroin overdose on December 31, 2015. Her mother and sister describe their feelings the day they got the news of her death.  (Baltimore Sun video)

Taylor Sprague was 21 when she died of a heroin overdose on December 31, 2015. Her mother and sister describe their feelings the day they got the news of her death.  (Baltimore Sun video)

Principals, teachers, parents, and others in the community gathered outside of City Hall to demand more money for Baltimore City schools. (Amy Davis, Baltimore Sun video)

Principals, teachers, parents, and others in the community gathered outside of City Hall to demand more money for Baltimore City schools. (Amy Davis, Baltimore Sun video)

Why? Because a lot of Americans care deeply about clean water and, like Obamacare supporters showing up at the recent Congressional town halls in recent days, they are likely to make their voices heard in the months ahead. Those aren't just tree-huggers, they are outdoorsmen and tourism boards, marinas and seafood dealers, municipalities that need a source of clean drinking water, hoteliers, watermen and restaurant operators, and so on. Their livelihoods matter, too, and the loss of EPA protections could cost them thousands of jobs in the long run. That, Mr. Trump, is why protecting vulnerable natural resources like water is complicated, too.