Galleries Videos CONTACT ADVERTISE
Famagusta 35°
few clouds
BUSINESS EDUCATION ENTERTAINMENT HEALTH POLITICS SCIENCE SPORTS TECHNOLOGY
12:08 Guide To Online Sports Betting: How To Choose A Sportsbook
08:28 What Are Some Reasons to Consult a Brain Injury Lawyer?
09:24 Blockchain Solutions for Enterprises: How To Increase Efficiency And Profitability
07:06 How To Deal With A Car Crash In New York
17:43 Tips to keep in mind while choosing the casino site
11:34 Relation Between Employee Theft and Pre-employment Screening Check
04:37 Search your own desired site to play sports for betting
18:00 Top 3 Career Path Options for Business Analysts Preview
15:35 The history of Imen Jane, who is the influencer and the charges on the...
18:48 Sebastian Vettel's Greatest Races
BIST
1128
GOLD
473.628
USD
7.8012
GPB
10.0697
EUR
9.1290
Breaking News
Top 3 Career Path Options for Business Analysts Preview
Close

Clark Burger, the burgers and poutine eatery that got its start next to the Senator Theatre, is opening a second location on Central Avenue in Little Italy.The restaurant is planning to open in the Fallsway Spring & Equipment Co. building at 415... 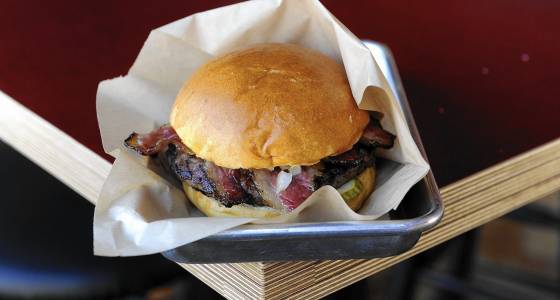 Clark Burger, the burgers and poutine eatery that got its start next to the Senator Theatre, is opening a second location on Central Avenue in Little Italy.

The restaurant is planning to open in the Fallsway Spring & Equipment Co. building at 415 S. Central Ave. The space previously housed Tortilleria Sinaloa, which closed earlier this year (the original tortilleria on Eastern Avenue is still open).

Clark Burger owner James Clark said he'd been looking for a second location in one of Baltimore's surrounding counties, but when the Central Avenue space became available he couldn't say no.

"This opportunity presented itself and it was a really low barrier of entry," he said.

Clark Burger, which opened its first location in 2015, serves burgers with a variety of toppings; fries with different dipping sauces; and several spins on poutine — fries with gravy and cheese curds. The menu at the new location will be largely identical to the original, Clark said. The kitchen at the Central Avenue space is slightly bigger, which will give Clark's team more room to experiment and offer more specials, he said.

LCD Soundsystem, A Tribe Called Quest and Solange will headline the Pitchfork Music Festival this summer in Chicago. (Feb. 27, 2017)

LCD Soundsystem, A Tribe Called Quest and Solange will headline the Pitchfork Music Festival this summer in Chicago. (Feb. 27, 2017)

The space doesn't need more than cosmetic updates, Clark said. Once he receives the necessary permits from the city, Clark hopes to have the new location open in about 60 days.

Business hours for the new restaurant haven't been established yet. Clark anticipates a strong lunch crowd, and said the restaurant will likely stay open until 9 p.m. or 10 p.m.