Christie on town hall protests: 'The heat is on the Republicans'

WASHINGTON -- Gov. Chris Christie said Sunday he had no sympathy for congressional Republicans who refused to hold town hall meetings out of concern that protesters would show up. "Welcome to the real world of responsibility," Christie said... 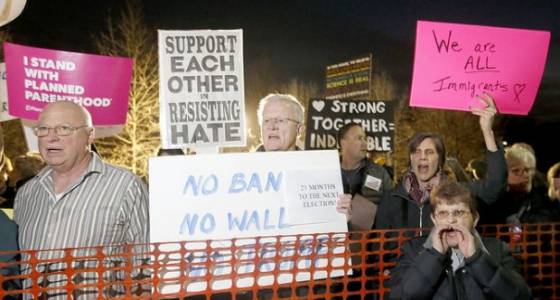 WASHINGTON -- Gov. Chris Christie said Sunday he had no sympathy for congressional Republicans who refused to hold town hall meetings out of concern that protesters would show up.

"Welcome to the real world of responsibility," Christie said on CNN's "State of the Union." "Right now, the heat is on the Republicans."

"We asked for authority to change the country," said Christie, pointing out that Republicans control the White House, Congress and most statehouses. "It's now on us to produce results and one of the things that we need to do is engage with the public."

Congressional Republicans across the country were met with outrage at their town hall meetings, similar to the Tea Party protests of 2009 that eventually helped Republicans regain control of the U.S. House the following year.

"There certainly was a similar vigor with the Tea Party movement," said Rep. Leonard Lance (R-7th Dist.), the only Republican member of the New Jersey congressional delegation to hold town halls during last week's congressional recess.

He was confronted by more than 1,000 people at each of the two events he held at Raritan Valley Community College.

Rep. Rodney Frelinghuysen (R-11th Dist.) has faced regular protests demanding that he talk to his constituents in person, though he did hold a telephone town hall last week with little advance notice. Rep. Tom MacArthur (R-3rd Dist.) held two tele-town halls, though he did meet with demonstrators outside a radio station where he took questions. Constituents of Rep. Chris Smith (R-4th Dist.) invited him to a town hall and held a meeting anyway when he didn't show up.

President Donald Trump has used Twitter to denigrate the "so-called angry crowds" -- who have filled town hall meetings across the country to oppose his plans to eliminate the Affordable Care Act, demand an investigation into possible ties to Russia, and want him to release his income tax returns -- as simply "planned out by liberal activists."

Christie, who has held more than 160 town hall meetings as governor, said that some of the demonstrators were professional protesters, just like members of New Jersey teachers' unions who came to his events.

"I understand why members of Congress don't like it but you know what?" Christie said. "You asked for the job. Go do it."