People working for Chicago aldermen as independent contractors won't have to disclose who else is paying them, abide by city ethics rules or obey strict limits on outside gifts under a measure the City Council is poised to approve Wednesday.The unanimous... 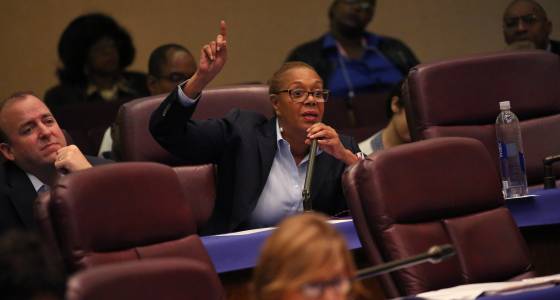 People working for Chicago aldermen as independent contractors won't have to disclose who else is paying them, abide by city ethics rules or obey strict limits on outside gifts under a measure the City Council is poised to approve Wednesday.

The unanimous vote triggered a quick rebuke from city Board of Ethics Chairman William Conlon, who called it "a very unhealthy secrecy that they are legislating into the laws of the city."

His comments came after a panel of aldermen on Tuesday voted to carve out the exception, saying they mistakenly classified independent contractors as city employees in early 2016 when they updated the city ethics code. Aldermen contended it was unfair to categorize the contractors as employees because it would require them to disclose details about their own businesses that don't belong in the public realm.

Sponsoring Ald. Leslie Hairston cited the example of political and public relations consultants who are paid to help aldermen respond to media inquiries and prepare newsletters — a task done for her by veteran operative Delmarie Cobb, who also works for other aldermen.

Hairston said federal law and IRS code make it clear who is an independent contractor — someone with their own business who sets his or her own hours and work terms, pays their own income taxes and does not receive benefits. Both full- and part-time council employees who are paid directly by the city and are at the beck and call of aldermen, however, still would be deemed city employees subject to ethics rules, Hairston said.

Mayor Rahm Emanuel told reporters this week he wanted to "push the envelope" on setting rules to make it tough for revelers to bring guns onto party buses in Chicago, but a plan he announced Tuesday stops short of outlawing firearms.

Emanuel acknowledged it would be difficult to ban legal guns...

Mayor Rahm Emanuel told reporters this week he wanted to "push the envelope" on setting rules to make it tough for revelers to bring guns onto party buses in Chicago, but a plan he announced Tuesday stops short of outlawing firearms.

Emanuel acknowledged it would be difficult to ban legal guns...

But just how employees paid out of the $97,000 annual expense accounts provided by taxpayers to each aldermen are classified is up to aldermen, and to some extent, the employees themselves.

The Tribune has reported extensively on council employees paid from those expense accounts. They have included relatives, political operatives and, in one case, a worker who had been banned from working directly for the city after he was accused of sexually harassing a co-worker. Ald. Matt O'Shea, 19th, was paid out of his predecessor's expense account and a committee fund before he was elected in 2011. It's unclear whether those types of workers are compliant with city ethics rules.

Ald. Carlos Ramirez-Rosa referred to a nationwide problem of workers who employers misclassify as independent contractors, even though they follow all the orders and rules set by their employers — a practice that runs afoul of IRS rules but allows employers to avoid paying taxes and benefits.

"It's incumbent upon each one of us as aldermen to ensure that we in our offices are following the law and that we are not misclassifying people," noted Ramirez-Rosa, 35th.

Conlon said no matter what the status of the person being paid with council funds, they have an obligation to reveal whether they have any conflicts of interest and abide by city ethics rules.

"You can give anybody any status you want," Conlon said. "You can call them independent contractors. The reality is, I believe, in city government — where they are being paid in part from city funds — they have a responsibility to disclose publicly any associations that ... are called for on the statement of economic disclosure. ... The light of day is a pretty healthy commodity on issues like this."

The issue came up after an undisclosed alderman this year asked the city ethics panel for an opinion on whether an unnamed contractor was allowed to receive compensation from a GoFundMe account.

In a Feb. 24 opinion, Conlon wrote that an independent contractor is a city employee subject to the ethics rules, including filing annual financial disclosures, complying with the city code of conduct, not being paid by noncity entities for work related to their council duties and abiding by a gift ban.

A week later, that opinion was reinforced by an ethics board notice to council independent contractors that they had to file financial interest statements by May 31. Not filing could make them subject to fines of $250 a day, the notice warned.

Cobb, the political consultant, called the requirement "ridiculous, just because of the very definition of 'independent contractor.'"

Aldermen are scheduled to vote Wednesday on the amendment, which would remove the requirement that independent contractors file financial disclosures. Whatever the outcome, Ald. Michelle Harris, 8th, chairman of the Rules Committee, indicated she didn't plan to change the way she runs her office.

"For the record, anybody on my staff that works for me full time, whether they are an independent contractor or not, is held in my office to the same standards, and they must do everything that the other employees do," Harris said. "I think it's just a way of keeping things transparent."