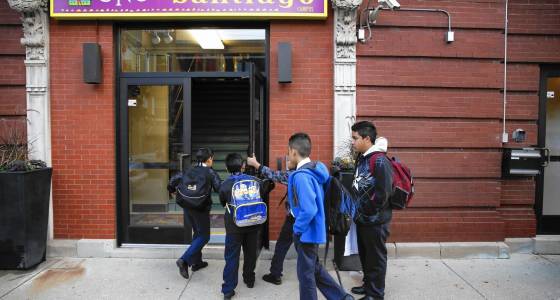 Seventeen charter school operators have started the application process to open as many as 20 new campuses within Chicago Public Schools.

The letters of intent submitted last week don't bind charter operators to open new schools, and a nearly yearlong process to approve detailed charter campus plans must still play out. CPS could reject some of the proposals, though charter operators in some cases can appeal to a state commission.

The number of proposed new campuses is similar to last year, when CPS ultimately didn't advance any plans for new charters. By December, a lone remaining applicant for an additional charter campus abandoned an effort to move into a shuttered South Side building.

"Letters of intent mark the first step in an extensive application and review process, and we are committed to considering only proposals that demonstrate academic quality, community support, and ability to address an existing need in the city," district spokesman Michael Passman said in a statement.

Of the 17 groups applying for new campuses, only three — Pathways in Education, Perspectives and Chicago Collegiate — are currently charter school operators, according to CPS.

Despite a cap on charter enrollment included as part of last year's Chicago Teachers Union contract, the city still is able to add thousands of charter students in the next couple of years.

CPS committed to limit the number of students enrolled in its charters from increasing much beyond the total capacity for all buildings at the end of last school year. The district also agreed to a "net zero increase" in the number of charter schools it approves.

While there's room to maneuver around language reached as part of the teachers contract, charter operators will still have to stare down the district's strained finances.

CPS warned that independently operated schools in the district could see their funding cut by a total of $18 million in April to match a spending freeze and furlough days imposed this year on district-run schools. The district later said it would scale back the planned cuts to $15 million.