CHARDON, Ohio -- When the Chardon Living Memorial Park is finished this year, you'll be able to walk up to a giant heart and ring it. A bell with a clapper will hang from the dimple of a heart-shaped monument called "Echo of the Heart." Visitors could... 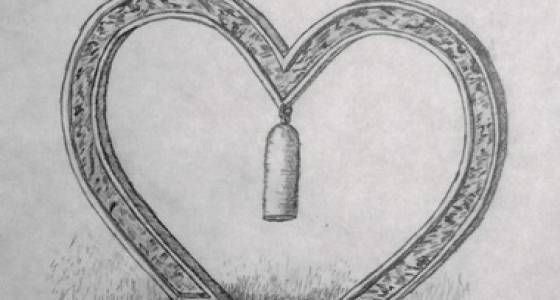 CHARDON, Ohio -- When the Chardon Living Memorial Park is finished this year, you'll be able to walk up to a giant heart and ring it.

A bell with a clapper will hang from the dimple of a heart-shaped monument called "Echo of the Heart." Visitors could ring it to honor the past and welcome the future.

The hollow bell will be 5 feet long and shaped like a canister. It will be part of a stainless steel monument 9 feet tall and 13 feet wide.

The memorial park near Chardon High School is part of the community's response to 2/27. That's what locals call February 27, 2012 -- five years ago today -- when three students were shot and killed and three others wounded by a student who was in the cafeteria waiting for a bus to another school.

Since the shootings, locals have displayed many signs with hearts and issued a commemorative book called "One Heartbeat."

The park will look partly to the past. It will host the monument and small commemorative plaques on three-foot-tall stand. The plaques will honor victims, survivors, first responders and sponsors.

But the park also will look to the future. Crews will build a play area and a fitness area, install 16 benches and refurbish an overgrown half-mile trail through the woods. The park will also incorporate a long-time chalet, sledding hill and picnic shelter.

The goal is to help families have fun, break a sweat and move forward together.

"This park is a rallying point for the community," says the monument's sculptor, Matthew Albright, who graduated from Chardon High in 2001. "It says we love the families of the victims, but the shooting doesn't define the community."

The park's board includes Katie Kalis, former president of the Chardon Hilltoppers' Class of 2015, the school's freshman class on the day of the shooting. "I really like the idea of its being a living memorial," she says. "Just a statue would get overlooked. This is more about celebrating life, not so much looking back."

Construction to begin in May

Chardon is the small, historic, picturesque seat of Geauga County. Locals say they were always close-knit, and the tragedy drew them closer.

"The community has stepped up tremendously," says the park's volunteer leader, Steve Turpin. He sought to raise $318,000 and has ended up with $350,000, counting promises of free work and equipment. The city will manage the park and decide whether to use any excess money for maintenance or improvements.

Turpin expects the first phase of construction to start and finish in May: installing the fitness and play centers and refurbishing the picnic pavilion, which will be renamed the Reflection Center. He hopes to finish the rest of the park, including the trail, by the end of the summer.

The 17-acre park will stand at 220 Basquin Drive, a short walk east of the high school, whose perch above a lofty town inspired the its nickname, the Hilltoppers.

The park will incorporate a sledding area and wooded trail owned by the city, and a pavilion that occupies a corner of the Maple Elementary schoolyard. Crews will refurbish a current parking lot and add spaces for people with disabilities.

An accessible path will lead to the play and fitness areas and the pavilion. There also will be a path to another parking lot used by the schools.

Sections of the park will honor victims of the shooting and reflect their interests. The trail will honor Danny Parmertor; the fitness area will honor Demetrius Hewlin and the play areas honor Russell King Jr., each of whom was died as a result of the shooting.

Chardon's Cold Harbor will serve as the park's general contractor for $1. The local Mapledale Landscaping, GameTime and Greenfields Outdoor Fitness will supply free work and equipment. Other contributors include the Cleveland Foundation, Chardon Rotary and University Hospitals.

Daniel Parmertor's mother, Dina, told The Plain Dealer last summer, "It's amazing how people are so generous. It's touching."

Says Turpin, "Out of everything bad comes something good. Look at what the community has done."