For the past year, passersby could easily sense that a major transformation was underway on the 700 block of N. Calvert St. — workers coming and going; cranes delivering building supplies to an upper floor; tantalizing glimpses of a lobby-in-progress as... 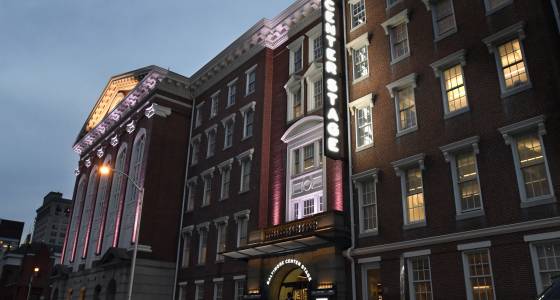 For the past year, passersby could easily sense that a major transformation was underway on the 700 block of N. Calvert St. — workers coming and going; cranes delivering building supplies to an upper floor; tantalizing glimpses of a lobby-in-progress as boards gradually came off glass doors at the entrance.

This weekend, the public will get its first chance to pass through those doors and see the results of a $32 million capital campaign that includes $28 million for the renovation of Baltimore Center Stage. (One non-construction part of the project was a re-branding that added the word "Baltimore" to the company's official title.)

"When I was hired, one of the first things I said I wanted to do was renovate the theater so it could feel more open and welcoming," says Kwame Kwei-Armah, artistic director of Center Stage since 2011. "I am so excited and proud that this has happened."

Located since 1975 in what used to be a school attached to historic St. Ignatius Church at the north end of the block, Center Stage now glistens inside and out in ways it didn't, or couldn't, before. The makeover, guided by the architectural firm Cho Benn Holback, starts with the large, illuminated marquee installed a few months ago, drawing fresh attention to the 19th-century structure.

Inside, people will find a much more spacious lobby and a new, airy box office (the old one was in a separate, uninviting area); multiple spots to eat and drink; a revamped fourth floor crowned by the thoroughly transformed Head Theater; and snakes. More on the snakes in a moment.

Take a look inside the newly renovated Baltimore Center Stage.

Adds managing director Michael Ross: "If you're walking or driving by and you look over at the entrance, it feels live. The whole project is all about bringing more energy to the building, and more light."

Adding to the vibrancy is an illuminated wall located outside the main-floor, main-stage Pearlstone Theater (that space was not significantly renovated), filled with quotes from theater works.

The Mount Vernon theater is set to unveil its $28 million makeover this weekend, and that will include new food and new places to eat. Flavor, the Mount Vernon restaurant opened by Julia and Vanna Belton in 2015,...

The Mount Vernon theater is set to unveil its $28 million makeover this weekend, and that will include new food and new places to eat. Flavor, the Mount Vernon restaurant opened by Julia and Vanna Belton in 2015,...

"I'm hoping we can devise an interactive game with the wall," Ross says, "so people can try to identify where the quotes come from."

Two lobby coffee/wine/snack bars now spice up the main floor, and a cozy cafe has been added to the lobby mezzanine (the nearby bistro Flavor will be Center Stage's partner in that venture). Plans call for the lobby's refreshment stands to be open daily for the public by next season.

"There isn't a great deal of footfall on Calvert Street," Kwei-Armah says. "I'd like to make this a destination. I want it to be a hub, not just a place that exists when people start coming in for a performance."

Among other new features is a six-story light sculpture inside the main stairwell of the building; it can change colors. Outdoor lighting on the theater building can have different hues, too, "including orange and purple, of course," Ross says, "since this is Baltimore."

But all of this pales in comparison to the changes on the fourth floor.

"I call it the beating heart of the renovation," Kwei-Armah says. "It is a revolutionary change."

The old, 355-seat Head Theater on that floor was a boxy, unattractive space with dicey acoustics and nondescript seats; patrons entered from narrow doorways on the side.

The completely redone theater, which will be inaugurated with a production of Mary Zimmerman's "The White Snake," has a central entrance along a curved wall, which will be animated by projections. Outside is a new, elegant lobby; inside, rows of seats covered in deep red cloth fan out on risers. Heating and cooling are provided from vents "beneath the seats, rather than above, very loudly, as before," Ross says.

Capacity ranges from 215 to 412; there are at least five possible seating configurations, depending on the desired thrust of the stage.

Launching the revamped Head Theater with "The White Snake," Ross says, "will use every bell and whistle a theater production can have."

The play is an adaptation of an ancient Chinese fable that involves a snake spirit (White Snake) and her likewise slithery friend (Green Snake). White Snake transforms herself into a young woman and marries a human. Complications arise when a Buddhist monk discovers the woman's true identity and decides to break up the bi-species relationship.

"Theatricality is in the play's DNA," Kwei-Armah says. "And it's absolutely family-friendly. If you're afraid of snakes, it's maybe not the piece for you, but at least the snake won't be under your chair."

"The play is a perfect fit for the beautiful new space," Power says. "All of Mary Zimmerman's work is really lush, with a lot of visual spectacle. But it's not about huge scenery moving. It relies on a lot of delightful little actor-driven magic."

Power finds a lot relevance in the story to our own times.

"It's as a tale of friendship, love and acceptance, but not the kind of acceptance that ignores all our differences," the director says. "It's not a kumbaya, we're-all-the-same message. It's about recognizing we all come from different spaces, but you can still accept the person as a whole."

The play calls for live music, which will be provided by four costumed musicians who also step into the action periodically. The original score, much of it improvisation, is by actor-musician Jeff Song.

"Mary Zimmerman is an American from the Midwest who adapted the story through a Western lens," Song says. "I was born in Arkansas and raised in Iowa, so there's a Western lens for my music, too. I'm blending Western and non-Western instruments in a nontraditional way."

Song and his colleagues have had their own new room to work in throughout the rehearsal process, a space created during the fourth floor renovations. Also new: A large educational suite ("The education department didn't have anywhere before," Kwei-Armah says) and a roomy costume shop.

A former chapel on the fourth floor also got spruced up, the once hard-to-see, now pristine stained-glass windows now adding a warm glow to the space, which can be used for receptions and other functions.

One more renovation bonus involves the sizable backstage area of the Head Theater, which can be transformed, by moving a temporary wall into place, into a well-equipped 99-seat box theater.

A little more than $6 million remains to be raised by Center Stage to fund the renovation project, which also involves major infrastructure improvements to the facilities.

Adds Ross: "It's a big moment not just for us, but for the community."

As Baltimore Center Stage finishes a $28 million renovation, here are some changes and improvements you may notice:

•New illuminated marquee, with exterior lighting that can change colors.

•Increased number of bathrooms and stalls