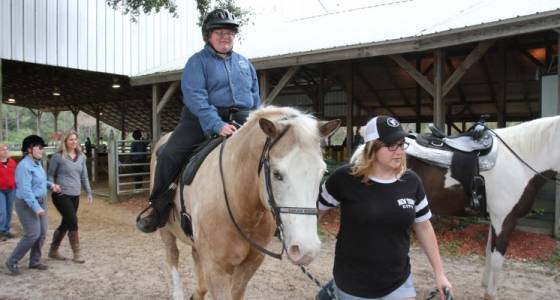 One day you're just a rich guy with a really big business-and-beer name.

The next, people are eyeing you like you're Snidely Whiplash.

You remember Snidely — that dastardly cartoon villain in the black cape and mustache determined to tie the heroine to the railroad tracks?

Only we're not talking about Dudley Do-Right's damsel in distress in the real-life version here. We're talking about special needs kids and the horses who help them.

The 30-year-old Bakas Equestrian Center in the northwest corner of Hillsborough County is a place that parents of some mentally and physically disabled kids clearly love. The 22-acre property has a stable, an arena and a pond where the horses cool off. It's a place kids (and adults) go for therapeutic horseback riding activities — recreational rides, classes, camps, shows and Special Olympics.

But trouble is brewing at the property, which is owned by Hillsborough County.

As the Times Christopher O'Donnell reports, mega-beer distributor Tom Pepin has designs on that land. Which happens to be next to 67 acres upon which sits his $1.5 million home.

Though his original proposal said the property would be used partly for activities for disabled students at Pepin Academies charter schools, he later told the Times it would be for his own personal use. He's also agreed with the county not to develop the land.

Families that currently use the place and would have to travel across the county are — understandably —not happy with this potential twist. Even the woman who agreed to the sale of the Seffner land tells the Times she wouldn't have done it had she known about the kids who would be affected.

Pepin's intent may be pure, his goal a fair exchange. He contends the current property is too remote for most people to use. (Though for the record, Seffner is not exactly the teeming heart of a city).

He says the current property is underused, which would be news to the average 45 riders who go there weekly.

In the ensuing brouhaha, someone suggested that perhaps Pepin could find it in his (already considerable) philanthropic heart to build that center in Seffner but also leave the current property alone to be what it's been for years.

And no, no one gets to tell a guy what to do with his money. Even if it might mean instant transformation from villain to hero in certain circles.

By law, the county must consider proposals like the one Pepin has pending.

Right about here it is worth noting that he and his company have in the past made political donations to five of the seven county commissioners. It would behoove them to proceed with great caution and consideration, lest they suffer some of that Snidely Whiplash backlash themselves.

Because for commissioners to move forward like a train barrelling down the tracks — without due thought for the good this place has done right where it is, or for the appearance that there's nothing money can't buy — would be, in a word:

Sue Carlton can be reached at carlton@tampabay.com.