A pickup truck plowed into a crowd of people watching a parade in New Orleans, injuring more than 20 people today, officials stated. The crash occurred at the intersection of Orleans and Carrollton Avenue, exactly where folks had been watching the Krewe of... 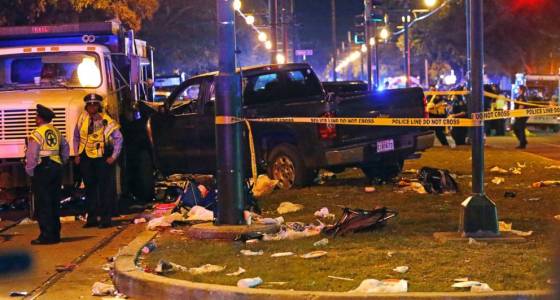 A pickup truck plowed into a crowd of people watching a parade in New Orleans, injuring more than 20 people today, officials stated.

The crash occurred at the intersection of Orleans and Carrollton Avenue, exactly where folks had been watching the Krewe of Endymion parade.

New Orleans Police Department Chief Michael Harrison stated one individual is in custody and he is becoming investigated for driving although intoxicated. He mentioned police do not not suspect terrorism.

"We suspect that that topic was very intoxicated," Harrison mentioned. "He is in custody. He is being investigated correct now and is at our DWI office."

Amongst the injured was a cop, the police chief said.

"One particular police officer was struck by a car," Harrison mentioned. "The mayor and I have gone to a single hospital, we did manage to speak with her, she was in great spirits but is injured."

New Orleans mayor tweeted that the driver was drunk, and that "We are grateful that no 1 suffered any life threatening injuries."

Our thoughts and prayers are with the victims injured by a drunk driver on the parade route right now. pic.twitter.com/EvKEpGZ7aL

Thanks to our 1st responders for the care you offered to the victims and other folks watching the parade. pic.twitter.com/b926KBX7iv

This is a developing story. Check back for a lot more.