A couple of times a month, Baltimore resident Patrick Campbell hands the keys to his BMW 335is two-door coupe over to a stranger to drive for a few days.For Campbell, a 53-year-old technical marketing consultant who works from his home near Patterson Park,... 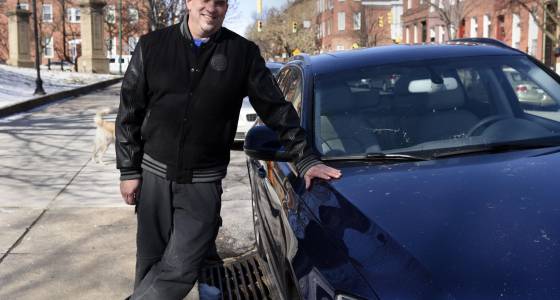 A couple of times a month, Baltimore resident Patrick Campbell hands the keys to his BMW 335is two-door coupe over to a stranger to drive for a few days.

For Campbell, a 53-year-old technical marketing consultant who works from his home near Patterson Park, renting out his BMW and his Audi Q5 sport utility vehicle through car sharing app Turo has become routine and just makes sense.

"It offsets your car payment if you can rent your car out," said Campbell, who said he progressed into car rentals after becoming an Airbnb host years ago and renting rooms in his home. "I got very comfortable with the sharing economy and letting people use my stuff, so to speak, but also getting money for it was kind of cool. I can't drive all my cars at once. Why not share?"

Patrick Campbell stands near his BMW and Audi cars, which he rents out with the Turo ride-sharing service.

Patrick Campbell stands near his BMW and Audi cars, which he rents out with the Turo ride-sharing service.

It's a question more people are asking themselves as mobile apps make it easy, efficient and secure to earn extra income by letting people borrow cars and RVs, stay or eat meals in their homes, or hire themselves out to run errands or help with household chores. Consumers who have become increasingly comfortable seeking out services online have been attracted by competitive prices, flexibility and sometimes, a personal touch.

"We can now use the Internet to intermediate," said Brent Goldfarb, associate professor of strategy and entrepreneurship at the University of Maryland's Robert H. Smith School of Business. "The internet now allows coordination of these activities in an efficient way."

Campbell, who also uses an online app to rent out an RV he owns, often gets request from business travelers from out of state looking to bypass a traditional rental in favor of a nicer car for less money or local people looking for an upgrade for a special occasion.

"Most people return the car in clean condition," Campbell said. "Most people are friendly. There's usually no sense that I'm letting a scoundrel take my car."

Turo, a San Francisco-based peer-to-peer network, connects owners who list their cars with renters who register, with the company screening both sides. Owners and renters arrange to meet personally to hand over the keys. Much like Airbnb, car owners write online reviews of renters, while renters write review of owners.

But the opponents they faced at a hearing in Annapolis...

But the opponents they faced at a hearing in Annapolis...

Turo, which expanded nationally and into Maryland in 2012, said its supply of Maryland-based vehicles more than doubled in the past year, and now lists vehicles from 350 owners in the state.

Total sign-ups — both car listings and rentals — have jumped from 54,000 in the United States and Canada in 2012 to more than 2.3 million last year, which includes 121,000 listed vehicles, Turo said. In Maryland, Turo says nearly 60,000 registered renters have used cars to drive locally or travel.

Turo, like other online platforms, allows buyers and sellers alike to create and build reputations.

"If I'm trying to lease my car to someone who calls me through a want ad, I have a big trust factor," said Goldfarb, also the academic director of the Smith school's Dingman Center for Entrepreneurship. "There's the problem of how do I know the person renting from me is legit and will return the car, and on the other side how do I know this car is something I want to rent? This platform solves those problems."

At Turo, owners set their own prices, based on supply and demand, with Turo getting a percentage that's based on how much insurance coverage owners want.

For renters, the company advertises its rentals as 35 percent cheaper, on average, than traditional rentals.

The network credits itself with inventing the type of insurance coverage that makes the arrangements possible. The company offers $1 million in liability insurance through Liberty Mutual that supersedes an owners' policy during a rental period, covering repair and replacement. The company declined to disclose claims rates, said Steve Webb, Turo's director of community.

But, he said, "you're meeting a fellow car enthusiast, or a neighbor, and shaking their hand and looking them in the eye. When that happens you're more likely to go above and beyond for that person."

Erika Lasker, 35, has rented her gray Smart car, which she calls Walter, more than 100 times on Turo. Lasker, who lives in Baltimore's Mount Vernon neighborhood and walks to work at Agora Publishing, typically rents it for up to $45 a day. Last year, she grossed more than $5,900 from her rentals, enough to cover monthly car payments and usually earn a profit.

"The car was just sitting there and taking up a parking spot, so instead of just letting it sit there, I figured I'd rent it out and try to make money," said Lasker, who said she has her husband's car, Lyft or the Charm City Circulator bus to fall back on if she needs a ride.

Ridesharing companies Uber and Lyft do not have to do fingerprint-based background checks of their drivers to continue operating in Maryland but will have to agree to additional reporting and safety provisions, state regulators said Thursday.

Ridesharing companies Uber and Lyft do not have to do fingerprint-based background checks of their drivers to continue operating in Maryland but will have to agree to additional reporting and safety provisions, state regulators said Thursday.

The Smart car is rented out frequently, she said, by people running errands or taking a day trip to Washington. It's also popular with college students in the city, she said.

"If someone else needs it, and I don't need it that day, and they're willing to pay me, everybody wins," Lasker said. "Everyone is polite and respectful of the car. People are more mindful when they're renting from an individual."

"The car was fun and easy to drive," one renter wrote in January. "Erika was a great host that communicated quickly and was flexible. I would definitely recommend this car, and I will rent it again if the opportunity arises."

Turo has been backed by some of the biggest names in venture capital, including Canaan Partners, Kleiner Perkins Caufield & Byers, Shasta Ventures, August Capital and GV, formerly known as Google Ventures.

"We like marketplaces where people aren't getting decent returns on their assets and where other people don't have access to those assets," said Deepak Kamra, general partner at Canaan Partners in Menlo Park, Calif., which led a Canaan $25 million round of funding in 2014 and has joined in subsequent funding rounds. "People can rent for six or seven days a month and pay off the entire car. It's like having a free car. To us, that's a compelling economic payoff."

GV General Partner Joe Kraus noted in an email that cars rank second to houses in the biggest purchases consumers will make.

"But that car loses value just sitting in the garage," Kraus said. "Turo offsets the cost of buying a car, and changes the economics by turning a depreciating asset into a way to earn money."

Goldfarb said it's difficult to measure how successful or profitable such online marketplaces will be long term, partly because many are bolstered by heavy venture capital funding. Still, he said, many of the ideas make sense.

"I suspect we'll see more of these platforms to help us utilize our unused resources more efficiently," he said.