Can Md. legislators police themselves?

Gov. Larry Hogan's proposals to increase transparency and ethics standards in Annapolis come at a propitious time. Not only did this year's General Assembly session open with federal indictments implicating a current and former member in a corruption investigation,... 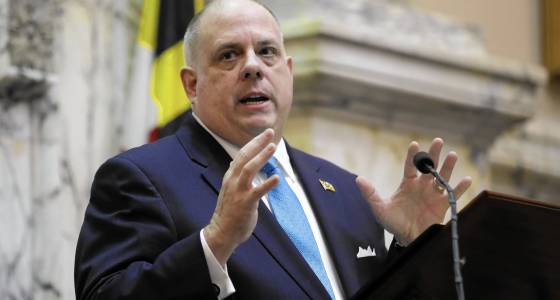 Gov. Larry Hogan's proposals to increase transparency and ethics standards in Annapolis come at a propitious time. Not only did this year's General Assembly session open with federal indictments implicating a current and former member in a corruption investigation, but the legislature is waiting to hear the results of its ethics committee's investigation into Del. Dan Morhaim's dual roles as an advocate for medical marijuana and a leader in one of the companies that has been awarded a license to produce and sell it. Many in a House committee appeared to bristle when Mr. Hogan's chief legislative aide, the former delegate and senator Chris Shank, exhumed a 15-year-old quote from a judge who decried the "culture of corruption" in Annapolis. We would agree that such a broad-brush characterization, then or now, is unfair to the vast majority of officials who serve the public honestly, but it's also not the strongest moment to argue the point.

There's a lot to like, at least conceptually, in Governor Hogan's proposals. A requirement that the General Assembly live-stream its floor debates and votes, as virtually every other state already does, is a no-brainer. Mr. Hogan has included money in his budget for the start-up costs of a system, leaving no reason for the legislature to refuse other than a desire to keep its workings from the public. Sadly, Senate President Thomas V. Mike Miller appeared to reinforce that notion last month when he admonished Daily Record reporter Bryan P. Sears for recording floor proceedings on his iPhone, citing an old and in recent years unenforced rule requiring his permission for anyone to bring "cameras, recording instruments, and similar equipment or electronic devices" into the Senate chamber.

A proposal for increased reporting requirements for registered lobbyists who are married to legislators (there are, at present, a few such pairs) makes excellent sense, as do the expansion of the cooling-off period between state service and lobbying for a broader set of executive and legislative branch employees, and a statutory prohibition on legislators or other government officials recommending lobbyists to potential clients.

Mr. Hogan's legislation includes a provision that his aides suggested during last week's hearing was directly targeted at the issues exemplified by the case of Delegate Morhaim, who advocated for specific policies related to medical marijuana before the legislature and the state licensure commission without disclosing past paid consulting work and prospective (now actual) employment by one of the license applicants. The governor's bill would prohibit legislators from taking or influencing legislative action that affects an entity "that employs the member or in which the member has, or is in the process of acquiring, an interest; and that the state has awarded, or for which the state is reviewing an award of, a license, lease, or contract or any state funds."

The intent is admirable, but in practice, it could prove problematic for a legislature in which members are expected to have outside employment — and the perspective and expertise that comes with it. Clearly, we don't want legislators to further or hinder bills that directly benefit them. Such a situation arose in 2013 when the legislature reprimanded Del. Tony McConkey, an Anne Arundel Republican, for pushing an amendment to legislation that would have saved him thousands of dollars in an effort to regain his real estate license. That was obviously wrong. But where do you draw the line? Should a plumber be allowed to participate in debates and vote on legislation related to licensure standards affecting the whole profession? Should a teacher be able to debate revisions to the state education funding formulas? The General Assembly should look at more targeted ways to address circumstances like those in Delegate Morhaim's case without threatening the institution of the citizen-legislature.

"Drain the swamp" might've been a campaign slogan of President Donald Trump, but Maryland Gov. Larry Hogan is seeking to push legislation that would do exactly that in Annapolis.

On Thursday, the Republican announced his Public Integrity Act that seeks to stop members of the General Assembly from...

"Drain the swamp" might've been a campaign slogan of President Donald Trump, but Maryland Gov. Larry Hogan is seeking to push legislation that would do exactly that in Annapolis.

On Thursday, the Republican announced his Public Integrity Act that seeks to stop members of the General Assembly from...

Another problematic element of the governor's bill is a proposal to strip the Joint Committee on Legislative Ethics of its responsibility to investigate and recommend sanctions of lawmakers and instead give that power to a newly reconstituted State Ethics Commission. We appreciate the administration's stated desire to provide a degree of independence in the investigation of potential wrongdoing by legislators, but the proposal presents separation of powers issues and, as an advice letter from the attorney general's office concludes, is probably unconstitutional.

That provision generated significant skepticism at this week's hearing on the bill, with legislators noting that the General Assembly has institution-specific rules, much as the judiciary does, that it has the unique duty and expertise to enforce. Furthermore, they argued that legislators who serve on the ethics committee take their work seriously.

The General Assembly ethics committee that's investigating Del. Dan K. Morhaim's work with a medical cannabis company has hired a lawyer to assist with the review.

Senate President Thomas V. Mike Miller, who on Friday disclosed the hiring of the special counsel, said the action underscores the serious...

The General Assembly ethics committee that's investigating Del. Dan K. Morhaim's work with a medical cannabis company has hired a lawyer to assist with the review.

Senate President Thomas V. Mike Miller, who on Friday disclosed the hiring of the special counsel, said the action underscores the serious...

That has tended to be the case in the past. For example, the committee pulled no punches in its report on the misdeeds of Sen. Ulysses Currie, a Prince George's Democrat, who secretly pocketed a quarter-million dollars from a grocery store chain while using the power of his office to intervene on its behalf. The question is what the legislature does about it. The Senate voted to censure Mr. Currie when, based on past practice, it should have expelled him. But short of a criminal conviction for a serious offense, no entity can remove a legislator other than the General Assembly, and that would remain true under Mr. Hogan's bill.

There is a great deal in Mr. Hogan's legislation that members of the General Assembly can and should support. But the toughest question Mr. Hogan's package poses is whether the legislature can effectively police itself. The results of the Morhaim investigation, which are expected soon, and any action the House of Delegates takes as a result, should provide an answer.