To truly figure how much promise Dylan Bundy packed into his first outing of the season Wednesday, start at the end.Bundy, who last year as a starter often began games spectacularly only to fizzle as it wore on, looked like a young man transformed in his... 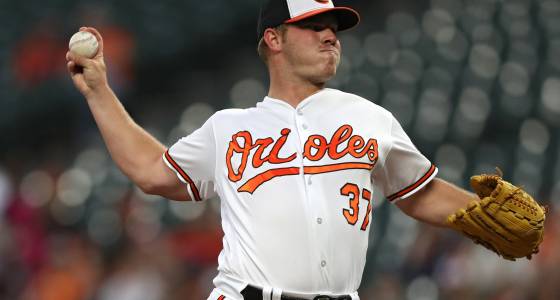 To truly figure how much promise Dylan Bundy packed into his first outing of the season Wednesday, start at the end.

Bundy, who last year as a starter often began games spectacularly only to fizzle as it wore on, looked like a young man transformed in his 2017 debut against the Toronto Blue Jays, which the Orioles won 3-1.

Armed with a slider he prohibited himself from throwing last year and the confidence of having his best pitch back, Bundy struck out eight Blue Jays in seven innings of four-hit, one-run ball.

“They had to honor all his pitches,” manager Buck Showalter said. “You talk a lot about [needing] command of one [pitch] to compete, two to win and three to, I don’t want to say ‘dominate.’ But when you give them three different looks and they have to honor three different pitches — really, four tonight — you like your chances.”

With the new breaking pitch complementing the fastball-curveball-changeup arsenal that made his rookie season successful, Bundy showed the makings of something special Wednesday. And that’s an asset the pitching-starved Orioles not only are hoping for, but need to expect if they want to return to the playoffs in 2017.

All this comes on the back of what was an unimpressive spring for the 24-year-old right-hander, who was really in his first major league spring training as a starter after preparing as a reliever in 2016.

Once he gradually built up his prized right arm last year, a cautious process due to the elbow and shoulder issues that cost Bundy nearly three years of his career, a midseason move to the rotation brought three months worth of starts that can best be described as supernovas.

Bundy would mow through lineups in the first few innings only to slow down and get tagged a bit as games went on.

Opponents’ OPS against him climbed from .637 and .787 in the first and second times through the batting order to .939 once a team had already seen him twice. Six of the 18 home runs he allowed came in the third time through the order or later.

Part of the issue, he later reasoned, was that he wasn’t throwing the cutter/slider that was so vital to him as a starter in his minor league career. He had spent so long hampered by injuries and believed that pitch contributed to them, so he shelved it in favor of a healthy 2016.

On Wednesday, he brought it back in a big way, using it in lieu of his changeup against a Blue Jays lineup that had seven right-handed hitters.

His first inning required only 13 pitches, with the Blue Jays fanning on four of them. He struck out the side, with the formidable top of Toronto’s lineup — second baseman Devon Travis, third baseman Josh Donaldson, and right fielder Jose Bautista — all falling to Bundy’s off-speed offerings.

“That was a little surprising,” Bundy said. “The slider was working a little bit better than I thought.”

Closer Zach Britton called the pitch a “cutter,” but regardless how you title it, the effectiveness was obvious.

“That’s a huge weapon for him,” Britton said. “He worked on that in spring, and you can see that transition. Some of the bigger hitters in that lineup, in the middle of that order, didn’t look too good on some of the pitches that he threw.”

Bundy retired the first seven batters he faced. He then allowed three soft singles that ended up plating Toronto’s only run, in the third inning. He then sat down nine straight Blue Jays before a single by Donaldson.

That hit came in the sixth inning, when Toronto had gotten two looks at Bundy and had him sized up. No matter. Bautista struck out for a second time, this on Bundy’s slider, and then Bundy won a 10-pitch confrontation with designated hitter Kendrys Morales that ended when Morales couldn’t catch up with a fastball.

“That was a pretty impressive at-bat with him and Morales and he won it,” Showalter said. “A lot of times guys finish their tank up there.”

Bundy wasn’t done. The steady diet of sliders made the seventh a bit easier. In his seventh and final inning, Bundy struck out shortstop Troy Tulowitzki for his eighth punch-out. He then retired Russell Martin and Steve Pearce to end his evening.

“I was able to throw more two-seams in on the hands, and also throw the curveball over later in the game as well,” Bundy said. “It worked out well tonight.

His 99 pitches tied a career high; his 17 swinging strikes were the most he produced in his major league career.

The final product was a deserved win for him and the Orioles, and a fabulous first step in the former first-round pick’s campaign as a starting pitcher. He finished the 2016 season with a 4.02 ERA in 109 2/3 innings, with a 4.52 ERA in his 14 starts. But of all his outings, both in the rotation or relief, few went as long or as well as his seven-inning stint to start 2017.

“It’s not going to be any secret,” Showalter said of the new pitch. “But it’s something that certainly puts his repertoire at a real challenge for hitters when he’s able to carry all those pitches.”