Music takes Broomfield High School junior Kayla Hruby to "a happy place," and Saturday her voice landed her in the Pepsi Center singing "The Star-Spangled Banner" to thousands of people.Before wrestlers took to the mat for the second day of the Colorado... 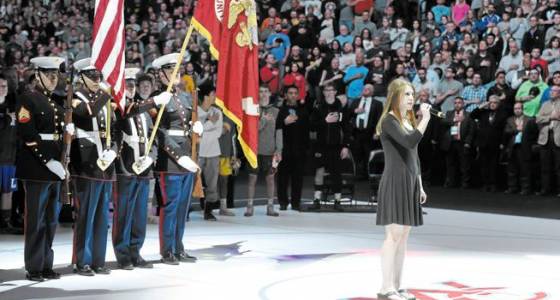 Music takes Broomfield High School junior Kayla Hruby to "a happy place," and Saturday her voice landed her in the Pepsi Center singing "The Star-Spangled Banner" to thousands of people.

Before wrestlers took to the mat for the second day of the Colorado State Wrestling Championships at the Pepsi Center, the crowd cheered on the Broomfield teen.

Her mother Sandra Hruby filmed a video of the performance Saturday at the tournament.

Since she posted it online, the video has gained hundreds of thousands of views.

"It's crazy how I could go from someone who has a couple hundreds views on an album on Soundcloud to almost 500,000 views in less than a day," Hruby said.

Feedback on social media channels has been inspiring, Hruby said. She'll hear comments about people having a bad day, but when they hear her sing the National Anthem, they feel blessed and lucky for what they have.

"That's what I've always wanted to do with my voice," she said. "Whether I'm singing choir or eventually become a pop star."

She hopes her songs influence people's lives everyday in a positive way, because that is what music has done for her.

If a day is especially stressful, Hruby pops in her ear buds and immediately feels more relaxed and focused, she said. Country artists such as George Strait, Alan Jackson and Garth Brooks are old favorites, and artists she grew up with.

"My grandma was a really important person to me," she said, and someone who also loved music. "When she died, I would just listen to music and it would help me through grieving and push me to have a more positive outlook."

Hruby, 17, has sung the National Anthem at events since middle school when she performed for Poor Boys Boxing, she said.

Her sophomore year in high school, she began singing at sporting events, including the boy's state soccer championship and the girls swimming state championship. Hruby also swims for the Eagles.

Although she doesn't have professional voice lessons, Hruby is a member of the school choir.

Saturday's crowd was significantly larger than all other performances she's ever done, Hruby said. At one point she heard the crowd size was about 14,000.

It was "intimidating" standing in front of the wrestlers with the U.S. Marine Corps honor guard, just a few feet away, she said. While she's sung in front of police officers before, the presence of the Marines made her want to "sing really well for them and make them proud."

"When crowd started screaming and yelling and clapping it was the biggest reaction I'd gotten from a crowd," she said. "It was definitely amazing."