For the first time, all members with a stake in Broomfield's oil and gas future sat at the same table.State officials heard first-hand from residents, both those selected to speak on the panel, and those who submitted questions throughout the four-hour meeting,... 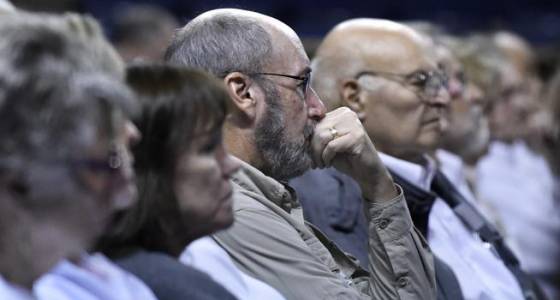 For the first time, all members with a stake in Broomfield's oil and gas future sat at the same table.

Broomfield officials estimated about 900 people attended the educational forum at the 1stBank Center.

Topics ran the entire gamut of issues around oil and gas — from blowouts, leaks and inspections — to the possibility of pipelines, forced pooling and health risks.

At the end of the forum, community questions were answered by the panel, including one question that was outsourced.

When asked about an emergency response plan, Jeff Bybee, deputy chief operations at North Metro Fire Rescue District, said the district is prepared, but not as prepared as they can, or will, be.

"We found Extraction very open in desire to work with us in developing emergency response plans," he said.

All parties agreed that the meeting is a starting point to move forward.

Facilitator Jonathan Bartsch asked that people hold their applause until the end of the presentations — instructions that were disregarded for the residential speakers.

Eric Jacobson, senior vice president of operators for Extraction, talked about the technology they would use to keep well sites safe. One of those measures would be to build a pipeline in Broomfield that would reduce the amount of oil and gas truck traffic in the city.

Initially, Extraction officials told Broomfield council that they planned to develop between 48 and 156 wells, Jacobson said, but a specific number wasn't certain at that time. They also agreed to consolidate 12 well sites to four and reclaim all existing vertical wells in their development.

In a January plan, they also agreed to reduce 25 wells on the Lowell and Sheridan pad and move them east to the other two pads, which are farther away from neighborhoods.

Extraction reported they will spend $1 million on landscaping for each site. Jacobson said they would remove older sites and commence landscaping before they begin drilling so that activities are concealed from view.

"We decided to do it to keep this community beautiful," he said.

Their plan is to drill and complete first phase in early 2018, starting from the west pad and working east. They hope by mid 2020 to have completed the activity phase of Lowell and Sheridan sites and have wells producing.

"It will be no more conspicuous than what Broomfield residents are experiencing today," he said.

John Tonello, engineering manager for this project, said fugitive emissions are typically found at connection points, where leaks could occur. Extraction reduces the number of those and uses an infrared camera to catch leaks.

"It's so airtight in its design, it does not require an air permit by the state of Colorado, which has some of the most stringent air regulations in the" nation, he said.

He pulled local permits for businesses that emit volatile organic compounds, or VOCs, in larger amounts than their proposed wells. He pointed to a gluten-free bakery, brewery and Broomfield gas stations that emit more VOCs.

In response a recent health affects study, he cautioned residents that an important thing to remember is that none of the sites in the study use "anywhere near the advanced level of technology" that Extraction uses.

"It has no relation to our Broomfield project," he said. "It's comparing a Model T to a Tesla."

Their development will actually clean air in Broomfield, Tonello said, between reclaiming existing wells and using the closed system they're planning on using.

Wildgrass resident Anne Marie Byers encouraged the crowd to be respectful after a man in the crowd called out "we don't want them here" and Bartsch reminded the crowd to hold applause.

Some of Wildgrass concerns were health and safety, noise levels, air quality, water quality, traffic and road conditions, and due process for residents mineral rights.

Community groups have been pressing for a closed system because tanks are responsible for most of VOCs, she said.

She cited a study that found 50 percent of VOCs come from oil and gas, and that 79 percent of that comes from tanks.

"If we have a closed system that takes care of a lot of that," she said.

She knows there are people in the community who don't want fracking , but the group she speaks for wants this process done in the healthiest way possible, including having experts weigh in on how many well sites can safely be drilled on each site.

She also expressed a desire to see an alternative site analysis that Extraction reportedly conducted. If that's not possible, she hopes it's reviewed by the newly approved update task force that will add oil and gas to Broomfield's Comprehensive Plan.

Matt Lepore with the Colorado Oil and Gas Conservation Commission, said that decision was based on numbers on nuisance impacts, such as light, dust, noise and odors. It was not based on health issues because there was no data available.

"There still isn't today," he said. "I would love it if there was."

Speece thanked Extraction for bringing the number of wells on Sheridan and Lowell sites down from 40 to 29 and 26.

"We don't deny extraction the opportunity to make money, but not at the expense of our health," Speece said.

"This hasn't been done in high population densities anywhere else in the Untied States," she said. "We'd rather not be the guinea pigs in this process."

Action on that moratorium is expected at Tuesday night's meeting.