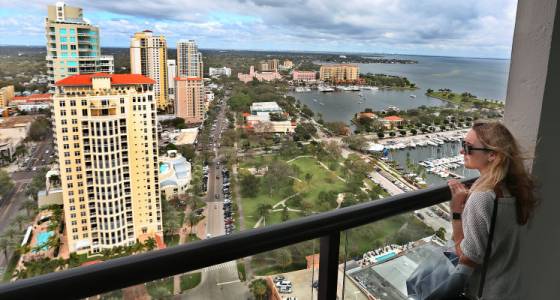 ST. PETERSBURG — As the Cross-Bay Ferry slips into the Vinoy Basin, Lynn McKinnon points at the high-rises along Beach Drive and lets out a happy little yelp.

"How exciting!'' she exclaims. "Just think, we're going to be in every one of those condos!''

It is 10:30 on a weekday morning, and McKinnon, a sales executive with Majesty Title Services, is about to shepherd a group of Tampa real estate agents and home stagers off the ferry and into the opulent buildings that have helped make St. Petersburg one of Florida's hottest housing markets.

Over the next few hours, the group will tour eight luxury condos, oohing over closets big enough to host overnight guests; ahhing over views stretching clear to the Sunshine Skway; puzzling over what appear to be kitchen towel bars hung eight feet off the floor.

They will exchange business cards with local agents, hoping to establish contacts that will be of benefit when someone in St. Petersburg is looking for a home in Tampa or — as increasingly happens — someone in Tampa is looking for a home in St. Petersburg. Because as even the most ardent Tampa-philes acknowledge, the city on the other side of the bay can no longer be likened, as a Tampa reporter once sniffed, to a "particularly pinched Albanian village.''

"I love St. Pete's lifestyle,'' McKinnon comments more than once as the group strolls past a man playing a sax, a couple walking a poodle, sidewalk cafes starting to fill.

Fittingly, the first stop of the day is where former Tampa Mayor Dick Greco and wife Linda landed when they stunned their Tampa friends by moving to St. Petersburg two years ago. At Rowland Place, a midrise a half block off Beach Drive, St. Petersburg agent Marian Maguire welcomes the group into a second-floor condo priced at $1.07 million.

Although Rowland is not on the water and doesn't even have a pool, the Tampa crowd likes the unit's two big terraces from which is possible to catch a glimpse of the bay. They nod approvingly as Maguire notes that the monthly homeowners association fee is just $709.

"That's great compared to what I call the big dogs,'' she says of the amenity-loaded Beach Drive towers.

From there, they walk past the newly built Bliss — where former Greco advisor Adam Goodman, plans to move — and on to Beach Drive's Parkshore Plaza. Though it has a imposing lobby with 24-hour concierge, agent Alona Dishy leads the group through an almost hidden side door.

After admiring an ultra-modern, townhome-style unit priced at almost $2 million, they take the elevator to the 28th floor and a 5,000-square-foot penthouse with wine and media rooms. Here, though, the group finds some nits to pick.

"For $3.65 million, that wouldn't be my choice,'' says agent Rhonda Price-Cannon, running her hand over a black kitchen counter top made of a strange, pocked material. "Nor the oak.

McKinnon also eyes the oak-look cabinets with skepticism. "What's that bar up there for?'' she says of a chrome fixture high up on one cabinet. "That's confusing to me.''

Then, as the others polk around, marveling at the views and enormous closets, McKinnon reverts to her tour-director role and warns that they are falling behind schedule.

"The gist is, it's fabulous and we can't afford it,'' says home stager Martha Golby.

At the Cloisters, the second oldest Beach Drive tower, the group tours a sixth-floor condo that just hit the market for $1.3 million. Though it too has a fine view, the drab, overstuffed furniture give the entire unit what home stager Kim Magnusson calls a "blah'' look.

"That didn't exude luxury at all,'' she says. "It needs to be staged. You see 10 properties in one day and it's like beauty contest — the one that wins is spot-on.''

The condo tower sparking the most anticipation is Ovation, which commands some of the high prices in the entire Tampa Bay area. A buyer paid nearly $7 million last year for a penthouse, and the sixth- floor condo now on the market for almost $2.8 million does not disappoint.

Slack-jawed, the group admires the open flow from room to room, the curved walls and floor-to-ceiling windows overlooking the Vinoy marina, the dark Brazilian- wood floors and contrasting whites and creams of the exquisite furnishings.

"I just decided I need to win the lottery,'' says Magnuson.

The listing agent, Dianne Swainston, says many of her high-end clients look in both St. Petersburg and Tampa. She is warm to the suggestion that she and other St. Petersburg agents do a similar tour of Tampa's Channelside and Bayshore Boulevard condos.

"St. Petersburg has a more mature clientele, a lot of international people, second-home people,'' he says. "I think with the condos in downtown Tampa, you don't see the size you're seeing here.''

There three more stops: the Florencia, where the group likes an airy unit similar in style to that at Ovation but almost $1 million less; the recently remodeled Bayfront Tower, whose views they agree are superb; and Signature Place, where ongoing construction has kept prices comparatively low.

At the end of the tour, the group's verdict is unanimous: the Ovation condo is the best. Somewhat, surprisingly, the runner-up is Rowland Place, home of Tampa's former mayor and the only building they visited that is not on Beach Drive.

"It's a nice complement to the others,'' says broker Kurt Gleeson. "Very elegant and well-priced.''

As they head to lunch and then back to the ferry, the Tampa contingent agrees that the trip has been a big success.

Agents and stagers have made valuable contacts, and give high marks to the St. Petersburg Realtors for sharing their time. McKinnon and her colleagues at Tampa-based Majesty Title have spread the word that Majesty will open an office in downtown St. Petersburg this year. Everyone has filled out survey cards praising the ferry in hopes ridership will increase and the service will become permanent. '

In short, it is a modest, if nonetheless heartening example of regional cooperation and mutually warm feelings in an area once known for parochial rivalries and snippy put-downs.

McKinnon even comes up with a marketing slogan: