Oregon currently limits court penalties for causing pain and suffering to $500,000, but that amount is not enough to encourage institutions to correct systemic problems of sexual abuse, unsafe workplaces and negligence, victims said at the state's capitol... 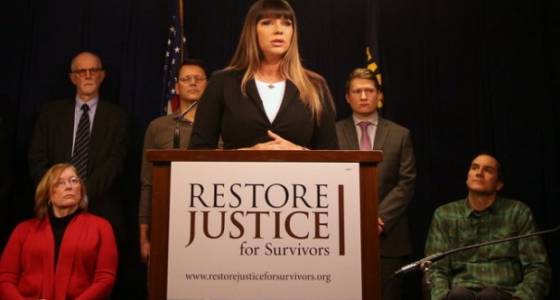 Oregon currently limits court penalties for causing pain and suffering to $500,000, but that amount is not enough to encourage institutions to correct systemic problems of sexual abuse, unsafe workplaces and negligence, victims said at the state's capitol Tuesday.

Two bills that propose to raise or eliminate the $500,000 limit refer to "a cap, but I call it a price tag," said Brenda Tracy, who survived a brutal Corvallis gang-rape at the hands of four football players in 1998. "And we have private universities and institutions that will look at this and think, 'You know what, we can afford that price tag on that survivor. That's not too much pay, so we will continue to sweep this under the rug.'"

Tracy was joined by Jon Anderson, who was sexually abused by his Portland Boy Scout troop leader as a middle school student, and Max Woodbury, who fell 11 feet and shattered several vertebrae in his spine while working at a Troutdale site lacking basic safety measures.

They urged the passage of Senate Bill 487 and House Bill 2129, which would allow juries to decide on a case-by-case basis without limits how much to award victims for non-economic damages due to enduring physical or emotional injuries.

Non-economic damages include pain, suffering, emotional distress and change of lifestyle. Injuries include physical injuries, paralysis, disfigurement, as well as trauma, like that from sexual assault.

If passed, either bill would alter the effects of a May ruling by the Oregon Supreme Court that limited jury awards for lifelong injuries, no matter how life-altering, to the state's statutory limit of $500,000. Juries would be free to set non-economic damages as high as $10.5 million, as they did in the case of a Portland pedestrian who lost his leg to a careless driver making an illegal turn, or higher.

It's not that victims necessarily want more money, the speakers said. It's that money is the only language these institutions understand, they said.

"The fact that sex abuse is morally wrong didn't facilitate any of the changes in organizations," Anderson said, likening the sex abuse cases in the Boy Scouts and subsequent cover-up to that in the Catholic Church. "Not until there were financial consequences or until they were forced by the courts did the organizations make the changes necessary to safely protect children."

In addition to removing the cap on damages for pain and suffering, the bills would increase the cap on noneconomic damages awarded in wrongful death suits from $500,000 to $1 million. If passed, that number would be adjusted for inflation each year.