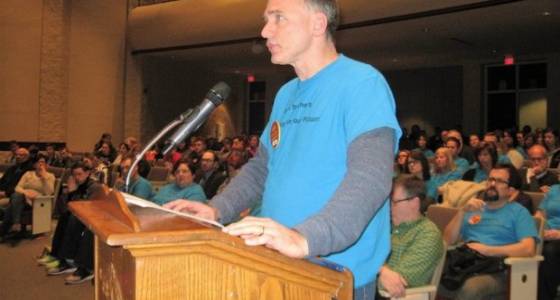 The resolution, containing 220 signatures, came almost two weeks after an impasse was declared in contract negotiations between the board and teachers. Negotiations over a new contract started in February 2016 but have stalled over a wage-increase disagreement.

In the resolution, the union says it has no confidence in the board's ability to lead the school district. The resolution says board members are more concerned about "their own self-serving political agenda" than pupils.

"It is the opinion of the BEA that in the board's constant pursuit of 'fiscal responsibility,' you have failed to support and protect the proud heritage of the Brecksville-Broadview Heights City School District," the resolution says.

The union presented the no-confidence resolution to the board Monday night. More than 300 teachers and district residents attended the board meeting in the Brecksville-Broadview Heights High School auditorium.

At the meeting, board President Mark Jantzen said it's not uncommon for union negotiations to reach an impasse, requiring the appointment of a federal mediator. He said the mediator, once chosen, will have an initial meeting with board representatives and teachers March 7.

Jantzen said both sides, not just the board, declared the impasse.

"The board will continue to bargain fairly and in good faith in pursuit of an agreement that will advance the principles of educational excellence, fiscal responsibility and fairness to employees," Jantzen said Monday night in a prepared statement.

Kelly Szell, a member of the union's Crisis Committee, told cleveland.com Monday afternoon that teachers are willing to settle contract talks with a mediator.

The rancor over contract negotiations comes 10 weeks before district residents vote on a 5.99-mill levy that would raise $6 million annually for operations, including teachers' salaries. It's the first tax increase the district has sought in 12 years.

"In our opinion, this board is now holding this much-needed levy hostage, its success conditional on the BEA accepting your negotiations proposal," the union says in its no-confidence resolution.

But board member Mark Dosen, in a prepared statement Monday night, said teachers and-or their supporters are hurting the levy campaign by spreading Facebook rumors that he is against the tax increase. He said they are quoting him from 2011 - before he joined the board - when he opposed a levy that year. Financial conditions are different now, he said.

Dosen said he supports the May levy and has shown that in several ways over the past few weeks.

"I am perplexed why a group would go out of their way to distort my position and damage our levy efforts," Dosen told teachers Monday night.

The teachers' latest contract was originally set to expire in June 2015. However, the administration and union agreed to extend that contract to June 2016 while negotiating a new contract.

Meanwhile, the district last year approved a new collective-bargaining agreement with more than 250 support-staff workers, giving them 1.5-percent increases. Also last year, administration workers, including principals, along with administration-support staff, received 1.5 percent raises. And on Monday night, the board approved 1.5-percent increases for about 12 workers who care for pupils before and after school.

"Why is it that every other employee is worth 1.5 percent but we are not," the no-confidence resolution states. "Why is it that, instead of uniting with the BEA to pass this (May) levy, you (the board) have elected to jeopardize it by playing these games?"

At Monday's meeting, Mary Kate Clancy, a second-grade teacher in Brecksville-Broadview Heights, said if the union accepts the pay scales offered by the board, "We would be among the lowest-paid teachers in this area."

Clancy said pupils would lose more than anyone as quality teachers flee and the district slips into a slow decline.

"We will not apologize for wanting to be fairly compensated for what we do," Clancy said.

Dacia Pitzer, a district resident, challenged the board to show how the schools could not afford a better contract for teachers. She said the board has withheld financial information.

"Our teachers aren't pitching a temper tantrum just to have something to do," PItzer said.

Jantzen said teachers' wages and longevity pay were frozen under the contract that expired in June 2016. However, that contract states that if a new contract is not reached, the district must reinstate longevity pay.

It means, Jantzen said, that 46 percent of the district's teachers have recently received 5-percent increases. He said only 12 percent of teachers are earning the same salary they did six years ago.

One board member - Debbie Bernauer, a former teacher - dissented from the board's stance. It was the first time she did so publicly.

"Although I certainly am well-aware of my fiduciary responsibilities as a member of the school board, I really believed that we should have treated you exactly the same way we did all of our other employees - by agreeing to a modest raise on your existing salary schedule for two years," Bernauer told teachers in a prepared statement.

Bernauer said she has made this argument to fellow board members during executive sessions but was unable to sway them.

"For now, I am hopeful that with the help of the federal mediator, somehow both sides will get enough of what they want and that this contract will get settled soon," Bernauer said.