Famagusta 14°
overcast clouds
BUSINESS EDUCATION ENTERTAINMENT HEALTH POLITICS SCIENCE SPORTS TECHNOLOGY
10:22 Four Benefits of Hiring a Dedicated Development Team
04:48 Mark Kelly, President of Safety Marking Inc., Discusses Structuring Effective...
17:58 Trump wants to play golf at the Biden swearing-in in Scotland - but is...
17:54 First doubts Regarding tightened Steps: two National Countries Extract...
10:39 Covid-19 : in France, the end of containment and entry into force of the...
04:34 The schools of Rome will use the Internet with light bulbs: what it is...
10:58 Kratom Tea: How Is It?
11:46 Office Furniture Products for you!
12:17 Top Clubs, Their Value, Revenue And Current Standings
11:14 Reasons Why Rewarding Yourself is a Good Practice
BIST
1467
GOLD
437.567
USD
7.3775
GPB
10.1172
EUR
8.9266
Breaking News
Navigating a Hearing Disorder Diagnosis
Close

RIO DE JANEIRO—Revellers all over Brazil were getting Carnival celebrations started Friday, taking to the streets to dance samba, drink beer and other spirits, and blow off steam at a time of economic angst and fury with politicians over a sprawling... 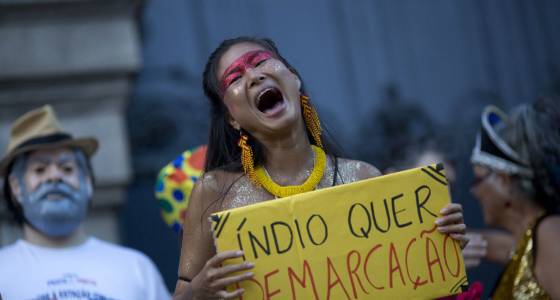 RIO DE JANEIRO—Revellers all over Brazil were getting Carnival celebrations started Friday, taking to the streets to dance samba, drink beer and other spirits, and blow off steam at a time of economic angst and fury with politicians over a sprawling corruption scandal.

In Rio, home to the world’s most famous Carnival bash, several so-called block parties were underway by the afternoon. Thousands of revelers danced amid 32 C heat with high humidity, standard during the Southern Hemisphere summer.

At the “Camelitas” block party, revellers dressed up as nuns in Rio’s bohemian neighbourhood of Santa Teresa. Many carried signs with statements ranging from insults against politicians to calls for the legalization of drugs.

“The lord says: you will try all the herbs that came from the seeds,” read one banner.

At the sambadrome, where top league samba schools begin competing on Sunday, thousands poured in expecting the traditional handing over of the city’s key to “Rei Momo,” or the king of carnal delights. This was always done with great fanfare by former Mayor Eduardo Paes.

However, Marcelo Crivella, a retired Pentecostal bishop who took power Jan. 1, has been coy in recent weeks about whether he would participate in Carnival, or how he might do so. His office didn’t answer the phone or return emails on Friday.

Holding the symbolic key was Maria Cristina, who appeared like somebody who had been stood up.

“I would also like to know what is going on,” she said when asked by an Associated Press reporter about what she would do with the key.

Cristina said the mayor’s office had told her and the symbolic key-holding group to come, but hadn’t said more about the plans.

The mayor “should separate religion from politics at our Carnival,” said Marisol Portela, a homemaker who had come to the sambadrome. “He will not be missed. We will throw our party anyway.”

Latin America’s largest nation is also recovering from a brutal impeachment fight last year that led to the removal of president Dilma Rousseff for illegal mismanagement of the budget. The man who replaced her, Michel Temer, is deeply unpopular.

One of Rio’s big block parties is dedicated to the president. It’s theme: “Out with Temer!”