The Boulder Planning Board voted 6-0 on Thursday night against an outright ban of banks on the first floor of Pearl Street buildings downtown, which the City Council temporarily approved two months ago. Instead, the Planning Board recommended that the council... 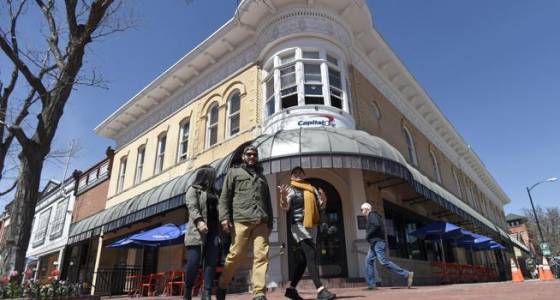 The Boulder Planning Board voted 6-0 on Thursday night against an outright ban of banks on the first floor of Pearl Street buildings downtown, which the City Council temporarily approved two months ago.

Instead, the Planning Board recommended that the council require banks seeking to locate downtown undergo a special use review.

It also recommended extending that policy beyond the area the council identified when it approved the ban — on Pearl Street between Ninth and 18th streets — to include three downtown zoning districts that cover stretches of Canyon Boulevard, Walnut Street and Spruce Street.

The council approved the ban by a 5-4 split, and will hold a public hearing on it May 2. It expires in late May, by which point the council is expected to decide whether an extension or another form of action is appropriate.

A use review is a tool sometimes exercised during the city's development review process, when proposed projects are outside the predominant use for which their particular zones are intended.

It is, effectively, an additional step in the process that focuses on compatibility and considers what is often referred to in the world of Boulder land-use planning as "neighborhood character."

"We're actually pretty good at using use review as a tool to help enliven the streets as much as possible," board member Bryan Bowen told his colleagues before proposing the alternative that the board ultimately recommended.

Theoretically, the use review process could be used to thwart the development on new ground-floor banks downtown, just as an extended ban would.

"You're sending a message to the people who own those banks that they're the last ones of the strip," he said. "You're essentially locking those four locations in. You might as well carve the word 'bank' in stone over them."

Zuckerman also came to the defense of banks' place downtown, which has been questioned by some who see them as a poor fit in an area intended for active, pedestrian-oriented uses.

He rejected the common characterization of banks as commercial dead zones and said they don't get enough credit for the fact that they cycle people in and out, albeit while providing a service less interesting to most than what's found in restaurants and shops.

"Maybe just leave it alone as is," he concluded. "I don't like this at all."

Board member Liz Payton offered an opposing perspective. She singled out the Wells Fargo at Pearl and 13th streets as "the most problematic, because it has that long stretch of blank windows."

Recently, the former Boulder Café location across from the Wells Fargo was filled by a Capital One bank-coffee shop hybrid. There are now a total of four ground-floor banks in the 10-block span identified by the council.

"I think we need to be very careful about not messing up what's a great thing there on the mall," Payton said. "You look at Canyon, with all the banks, and it's pretty dead over there."