Stephane Belmon is a white, non-Muslim citizen of the United States. On the surface, he has no reason to fear the travel ban imposed by the White House earlier this year, which the president has vowed to revive after a federal court put it on hold.But Belmon... 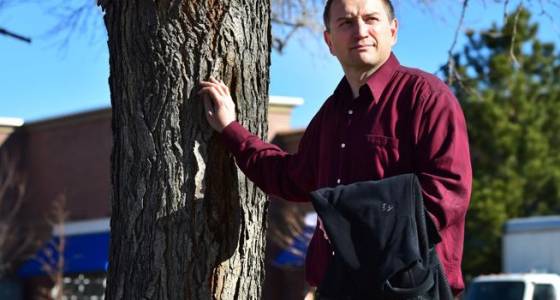 Stephane Belmon is a white, non-Muslim citizen of the United States. On the surface, he has no reason to fear the travel ban imposed by the White House earlier this year, which the president has vowed to revive after a federal court put it on hold.

But Belmon is worried, because the Boulder resident was not born here, but in France. He became a citizen of this country after marrying his American wife.

Today, Belmon works for Google, and he is one of many in Boulder's tech community anxious over the new administration's approach to immigration, travel and non-native visitors to the U.S.

"It's been very concerning, and we have regular conversations about it," Belmon said. "It's difficult to do business in this climate of uncertainty.

"For a party that historically has been business-friendly, this did not feel friendly at all."

About 150 of Belmon's Google co-workers participated in an informal protest at the Boulder offices in early February, taking to the rooftops with signs and slogans in a show of solidarity.

"It was not sanctioned by the company; it was a simply a group of employees who were upset. A lot of the work force is immigrants, green card holders, visa holders."

Google warned its employees not to travel after the executive order was issued in late January. And Belmon — who stressed several times he was speaking as an individual and not for his company — said he would still advise some of his peers not to travel internationally for work.

"My entire team is foreign born — they don't look like blue-eyed, blonde," he said. "So I don't know what could happen."

Tech as an industry relies heavily on foreign workers. More than 125 companies, including Google, signed an amicus brief against the executive order that was filed in a San Francisco court of appeals.

A research report from Goldman Sachs found that H-1B workers hold as many as 13 percent of all tech jobs, and that 70 percent of the H-1B visas granted in 2015 went to engineers, designers, coders and others from India.

In addition to those workers, many others hold green cards or have followed a path to citizenship like Belmon.

Jonathan McQueen, CEO of Boulder's CANVAS Technology, said he recruits from elite programs in Europe because that is where he can find the most talented staff for his growing autonomous vehicle company.

The travel ban concentrated on seven Muslim-majority countries: Iraq, Syria, Iran, Sudan, Libya, Somalia and Yemen. But the detaining of travellers in U.S. airports has not been limited to citizens of those nations.

A prominent French historian was detained for 10 hours in Houston this weekend, the New York Times reported. And the former prime minister of Norway was held temporarily in Washington, D.C. earlier this month, according to the Washington Post.

"There's not much you can do to prevent it if the government decides they want to question you," said Brad Hendrick, a Boulder-based immigration attorney.

Hendrick's office was "flooded with calls" the Monday after the travel ban was announced.

"A lot of people were very concerned," he said. "People from countries with a significant population of Muslims or individuals from countries that might have been in the news frequently as being perceived targets of the administration.

"They are wondering, are we next?"

Even the privilege of his citizenship has not been enough to put Belmon's mind at ease. After, all, he said, history has shown that citizens can be detained, too.

"I don't have to look very far back to see what happened to Japanese citizens, just 75 years ago. One day they're fine, the next they had people banging on their doors to take them away."