Boulder County will seek competitive bids for the operation of its recycling center, which has been run under a no-bid contract held by the popular nonprofit Eco-Cycle for the past 17 years.Like other recycling centers, Eco-Cycle has struggled to remain financially... 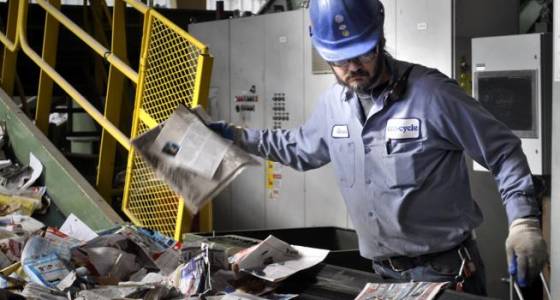 Boulder County will seek competitive bids for the operation of its recycling center, which has been run under a no-bid contract held by the popular nonprofit Eco-Cycle for the past 17 years.

Like other recycling centers, Eco-Cycle has struggled to remain financially viable as prices for recycled cardboard, plastics and glass have dropped precipitously.

Eco-Cycle's relationship with the county has also come under scrutiny since Boulder Mayor Suzanne Jones was named its executive director in 2013. Suzanne Jones is the twin sister of Boulder County Commissioner Elise Jones.

In a statement Friday regarding its request for proposals (RFP) for a new contract, the county said that Elise Jones had recused herself from any discussions or planning connected to the recycling contract or the new RFP.

Eco-Cycle has operated the Boulder County Recycling Center, as it's known, using a cost-plus contract, but that arrangement has become too expensive and burdensome, according to Boulder County Administrative Services Director Jana Petersen.

"Our current contract leads to duplication of efforts, not only in reviewing expenses but also in other administrative work such as billing, maintenance, and other issues," Petersen said in the statement. "That duplication of effort is something we cannot afford at a time when the prices we receive for most of the materials we sell from the recycling center are relatively low."

Instead of a cost-plus contract, the county is seeking a fixed-price contract, meaning that whichever company wins the deal will be paid a set amount annually and will be responsible for its own profitability.

Petersen said the county paid Eco-Cycle $3.2 million to run the center in 2016, but she did not have a breakdown on what its costs and profit were.

In its statement, the county said the new bid process was not a criticism of Eco-Cycle's performance.

Petersen said the county issued the RFP through the state of Colorado's contracting database, which contains more than 400 companies. Within that group, 10 national entities with expertise in these kinds of recycling centers were specifically targeted, she said.

Boulder-based Western Disposal, a for-profit trash and recycling company, is evaluating whether to respond to the RFP, but Vice President of Marketing Bryce Isaacson declined to comment on the competitive environment in which the county would be seeking a new operator, or at least a new contract.

"We believe we're uniquely qualified to operate the center, which we've been doing since 2001," she said. "We started recycling in Boulder more than 40 years ago and we have a really strong relationship with the county."

Savage said Eco-Cycle did not view the new process as reflecting poorly on her organization.

"It's been quite some time since the county put this out to bid. They are doing their due diligence," she said.

Whether Eco-Cycle could survive without the county's recycling business if it doesn't win the bid isn't clear.

"I don't know (whether we would survive losing the contract) but we want to continue to operate the BCRC, so that's where our energies are focused right now," she said.