Bumblebees are doing pretty darn good, thanks.While the buzz on bees continues to include a lot of concern about the phenomenon of colony collapse in honeybee populations, their more burly brothers and sisters appear to be in high clover — at least... 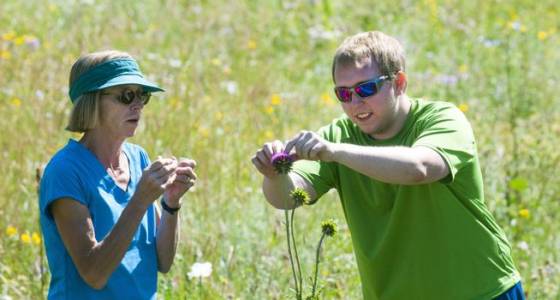 While the buzz on bees continues to include a lot of concern about the phenomenon of colony collapse in honeybee populations, their more burly brothers and sisters appear to be in high clover — at least in Boulder County.

A new study of bumblebee populations in Boulder County conducted by researchers at the University of Colorado showed that none of the 22 native species registered declines over a five-year period.

Additionally, two species that had been believed to be facing potential extinction in parts of North America were discovered in multiple locations of the county.

Study co-author Diana Oliveras said that while on the surface the study's results would appear favorable, little in science is usually very clear cut. And that is the case with this study, recently published in the Journal of Insect Conservation.

"In the 22 species of bees that we looked at, there were no significant declines or significant increases. The thing that was unexpected is that we found one species whose males appeared early. That's an anomaly."

She was referring to the species Bombus nevadensis, its males found to be showing up in early spring — much earlier than their more usual late-summer debut. It could be for one of three reasons, she said — none of them good. The explanations could include a reaction to climate change, the presence of unfertilized queens that couldn't find mates or excessive inbreeding, which could be a possible sign of pending decline.

Oliveras's co-authors on the study are Carol Ann Kearns, associate director of the Baker RAP, and Claire Lay, a doctoral graduate from CU's department of Ecology and Evolutionary Biology.

Rella Abernathy, integrated pest management coordinator for Boulder, has not read the study yet and did not want to comment on it directly. But she said the status of the bumblebee locally is of critical importance.

"Honeybees are super important for pollinating, but they are not native insects," Abernathy said. "They are livestock. They were imported to pollinate the non-native crops that the Europeans brought over.

"What we really care about, for our ecosystem's integrity and health, is the native bees we have," which include bumblebees.

"We have over 500 species of wild bees in Boulder County," Abernathy said. "And I can't remember how many there are nationwide, but it's a lot. Many are these tiny little bees. Most nest in the ground, or stems of plants or impressions of wood. There is whole lot of them and they are really important for native plants. But they also pollinate our crops."

Abernathy cited the recently launched Boulder County Wildlife Project, through which citizen scientists are encouraged to log their observations of everything ranging from the widow skimmer dragonfly to black bears.

"A lot of these bees are really hard to survey, so there isn't that much information on how many are disappearing or what their actual numbers are," said Abernathy.

"One of the things that some of us would like people to concentrate on is wild pollinators, all the different species and how different they all look. A lot of people wouldn't even know they were bees."

For the bumblebee study, the CU team recruited undergraduate RAP student volunteers to comb nine 100-meter-by-100-meter areas — three each at elevations of 5,600 feet, 8,500 feet and 11,500 feet — according to a news release.

Groups were dispatched two or three times a week during peak bee activity time, which was 10 a.m. to 3 p.m. during the summer months from 2010 to 2014. All bees captured and inventoried were subsequently released.

The researchers and their assistants collected a total of 6,019 bees of 22 species. Only one species present before 1970 was not found — Bombus auricomus. It is typically found on Colorado's eastern plains, and was never prevalent in Boulder County.

On the plus side, an eastern bumblebee thought to be on the decline, Bombus pensylvanicus, was found at several sites. Also found was the western Bombus occidentalis, which has seen a steep decline elsewhere but was found at four different sites the researchers targeted.

Oliveras said their research follows on a previous study on which she teamed with Kearns. In the study, the types of bumblebees present in Boulder County between 2001 and 2005 were compared to those present in the early 1900s. That comparison concerned itself only with species represented, not their population numbers.

"We can tell you what bees were present in the early 1900s, and what is present now," Oliveras said. "There was really good consistency" between the two.

"Boulder County is doing a great job in maintaining open space and floral resources, that the bees found 100 years ago are still found now. But we can't talk about (comparative) abundance, because we don't know how many we had before."

The Boulder City Council adopted a resolution in May 2015 making it a bee-safe city, stating that the city will not use neonicotinoid pesticides, except when necessary to save old and valuable trees.

Adrian Carper, a post-doctoral research associate in CU's Department of Ecology and Evolutionary Biology, said by email: "It is important to note that this study was only done on protected land (i.e., city of Boulder Open Space, Boulder County Open Space, CU Mountain Research Station, and USFS land) and I would caution against implying county-level patterns from only nine plots on protected land, especially since the biggest threat to wild bees is habitat loss from agricultural and urban development."

Carper added, "Moreover, bumblebees make up just 4 percent of the 552 species documented to occur in Boulder County, and the reality is we have almost no population data for the vast majority of Boulder County's wild bee species."

Colorado, he said, has at most recent count documented 946 bee species statewide.

The new CU study, Carper said, is right to underscore the need for "more baseline inventorying and especially long-term monitoring, which is really necessary to adequately assess population trends over time."